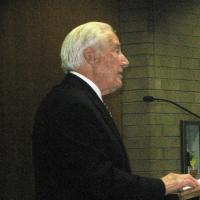 “Stealing is wrong, no matter what,” said Councilman Gary Kendrick, introducing the resolution. “I want to give an opportunity for the council to collectively and individually condemn her actions…I want to personally say I’m sorry to the Basso family and to what’s happened to them.”

Bob Basso, owner of Century Design Inc., spoke on behalf of his family and employees. “We’re a small manufacturer of 9-15 people. Jillian Hanson-Cox stole a large amount of money for five years. She pled guilty on September 14, 2012. She was scheduled for sentencing three months later. Prior to her sentencing, she and her attorney arranged for letters of support. These letters of support were damaging to me and my family. Almost everyone who wrote letters of support was beneficiaries of stolen money.”

Next, Basso’s son Barry took the floor. “Retired Fire Chief Cliff Diamond was a recipient of a Hawaiian vacation with stolen money,” he said, adding, “Some have expressed remorse for writing letters. We will contact all recipients of stolen funds put together by the FBI.”

Councilman Bob McClellan addressed the Basso family. “I also had a situation in which I had funds embezzled from me. It was less than $100,000. Luckily, I had an auditor pick it up,” he recalled, adding that he was able to get his money back. “I was close to Jillian; we sat next to each other. I know how you feel.”

McClellan later said he would send a new letter to the judge retracting his former letter of support for Hanson-Cox, Councilman Kendrick told ECM.  That letter of support was made before the full facts of how the stolen money was spent were known; in fact Hanson-Cox spent money on a lavish personal lifestyle and her political campaign as well as charities including the Mother Goose Parade.

Councilman Bill Wells expressed his sympathy. “I thank the Basso family to take the time to talk on the phone with me during the week. I think forgiveness is important. You can choose not to forgive her. I think you have every right to be devastated. I apologize as a council member. If you need help in the future, or if there’s anything I can do, I will try.”

Pro Tem Mayor Tony Ambrose was just as sympathetic. “I’m truly sorry of what’s happened to you. I fully support the resolution today.”

Kendricks asked the council to vote, and the resolution passed with all council members voting in favor.