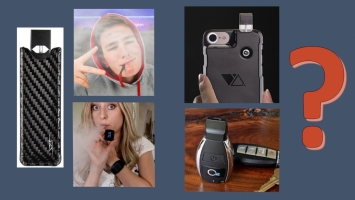 “My responsibility is to keep these extremely dangerous devices out of the hands of our children…This is a disaster in the making.” – Councilman Gary Kendrick

“I’m very afraid of a trend I see in our country of slowly giving away our freedoms for safety,” – Mayor Bill Wells

December 13, 2019 (El Cajon) – The El Cajon City Council took up Councilman Gary Kendrick’s proposal last month to increase fines for illegal tobacco sales to minors and to ban flavored tobacco and vapes disguised as USB memory sticks, lipstick tubes, pens and other objects. The hike in fines passed, along with added teeth to the ordinance, including suspension of a retailer’s business license for numerous violations.

But despite many El Cajon residents and others voicing concerns over health impacts of vaping, Kendrick fell short of the votes needed to enact a ban on flavored vapes and vaping devices attractive to minors. Councilmen Steve Goble, Phil Ortiz, Mayor Bill Wells prevailed with “no” votes, over Councilmen Gary Kendrick and Bob McLellan who voted “yes.”

For several years now, the City of El Cajon has followed through on cracking down on gas stations, convenience stores, and liquor shops caught selling tobacco products to minors under 21 years of age. The city has given the option to these businesses of suspending tobacco sales for 30 days instead of paying a $1,000 fine.

The city stresses that a process exists for accused retailers who are cited for breaking the law to appeal their citation. When the city does its retail monitoring stings action during the year it includes regular retailers, liquor, tobacco and vaping device shops. Those retailers all must comply with a mandatory inspection fee.

Kendrick’s proposal would have gone farther, prohibiting the sale of vaping paraphernalia and disguised vaping devices. It came after when the Cajon Valley Union School District unanimously passed Board Trustee Jill Barto’s proposal to ban the personal smoking devices on district property.

The hearing including many speakers for and against the ban. East County Magazine has not been able to independently verify that the makers of JUUL vaping devices in anyway influenced the number of people who filled the council chamber. However, business cable TV channel CNBC has acknowledged that JUUL records the e-mail addresses of vape smokers and urges its users to attend public meetings where the vaping and flavored tobaccos are before lawmakers.

El Cajon would have been the first city in San Diego County to have actually enacted and implemented such a ban. County Supervisors voted 3-2 on Oct. 15 to make it illegal to buy or sell flavored vaping products within unincorporated areas of San Diego County. The law puts a one-year moratorium on the sale of vaping devices and permanently bars flavored nicotine. The county's chief administrative officer is expected to return to the Board of Supervisors in January with more details on how the county expects to enact the ban.

Supervisors Greg Cox, Nathan Fletcher and Dianne Jacob voted in favor of the ban, while Supervisors Jim Desmond and Kristin Gaspar voted against the measure.

Other cities, counties and states are taking aim at vaping products.  The states of Michigan. Massachusetts, and Los Angeles County Supervisors have all recently enacted bans on some vaping products despite great pressure from pro-vaping forces.

The bans come as the rate of teens who are vaping grows, a fact that has triggred warnings from the U.S. Food and Drug Administration (FDA).  In addition, the U.S. Centers for Disease Control warns that in the U.S. 47 sudden deaths have occurred due to vaping and 2,290 vaping-related serious lung illnesses have been reported nationwide, many of them in young people.

The U.S. Centers for Disease Control now urges consumers to refrain from using e-cigarettes and to avoid any with THC and/or Vitamin E-acetate, especially those from informal sources like friends, family, or in-person or online dealers. In addition, the CDC also urges smokers not to add any substances to e-cigarette or vaping products that are not intended by the manufacturer, including products purchased through retail establishments. THC-containing products continue to be the most commonly reported e-cigarettes, or vaping, products used by patients with sudden onset of lung illness, and it appears that vitamin E acetate is also associated.

However, the CDC warns,”many substances and product sources are being investigated, and there might be more than one cause. Therefore, while the investigation continues, persons should consider refraining from the use of all e-cigarette, or vaping, products.”

While the members of the El Cajon City Council have generally been unified in their rulemaking, November’s City Council meeting revealed cracks when the member 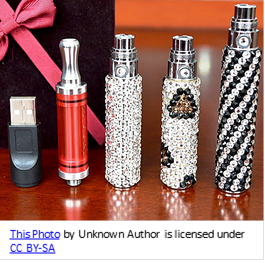 s discussed their opinions about the proposed ban.

Kendrick said that at the bare minimum, the Council should ask city staff to “come back with some ordinances that would ban the sale of the USB look-alike devices and other devices that don’t look like e-cigarette devices.”

Pressing the point, he added, “We have a number of people who came here who made some really good points who have affiliation with the Neighborhood Market Association. We’ve been dealing with that group for many years. They have said, “Let us do it” – but they never have been successful with alcohol and tobacco. Never. They don’t have a whole lot of credibility with me.”

Before the vote, Mayor Wells made a point of order for each of the councilmen to express their opinions.

Steve Goble said that every time a government institution makes a law, there are unintended consequences. “Do you solve one problem and create another?” he asked. “I am concerned that the vaping stores are being demonized.” He said his understanding is at the local stores “sell a water-based product which is different from what you are getting online as an oil-based product,” noting that the oil-based product combined with the vitamin E acetate is suspected of causing a condition called wet lung. “I’m concerned with the rights of people. I’m concerned with parental rights and their responsibility to their kids and overreaching there. I’m concerned about restricting adult’s rights to what is a legal product until the FDA says ‘no more.’” But he predicted, ““I think the retail stores will lose because they are selling a bad product.”

Councilman Phil Ortiz said, “The question we are dealing with here is how do we protect children while not limiting people’s rights? I don’t know whether the solution we’re presenting is going to solve the problem.” “If we’re going to implement any policy, I firmly believe that policy needs to be reviewed to see if we effected what we intended to do.”

Then Mayor Wells announced that he would cast a “no” vote to snuff out the ordinance.

“It’s not because I’m in favor of smoking. It’s not because I’m in favor of vaping or that I’m in favor of marijuana. As a health care professional…I’m not in favor of putting everything in your lungs that is not air. Having said that. I’m an American and I believe a lot in freedom. I’m very afraid of a trend I see in our country of slowly giving away our freedoms for safety,” the Mayor said. “I want to put this in perspective. The CDC says 39 people have died from vaping in 24 different states. This last year we have had 5,500 deaths from motorcycle accidents. We have 40,000 killed from automobile accidents. 300,000 people will die from obesity related illnesses.”

Wells continued, “If we are going to use this logic that we have to protect kids from themselves because they are going to do something stupid and they are going to get addicted to nicotine. Let’s go after the big one. Let’s say 65 percent of kids are going to go out and drink a Coca-Cola everyday and 25 percent of kids are going to have a candy bar every day. Shouldn’t we be going after anybody who is going after our kids by giving them a Coca-Cola or candy bars? That’s kind of an absurdity because we accept addiction to sugar just like we accept addiction to alcohol. But there has not been any substance known to man that has killed more people than alcohol…We have accepted that as our country is free, even though I think it is a really bad thing to do.”

Despite Kendrick adding to his motion that he would accept a six-month sunset clause until the CDC issues an opinion, the ordinance to ban flavored vapes and vaping devices resembling other common items was voted down, killing the measure.

While Kendrick said he was disappointed with how his ordinance was turned down by his colleagues, he indicated he may return with a new proposal in the coming months.

“We have received letters from the local area school districts asking for us to crack down on this problem. We’re in a crisis right now with all of these kids vaping," he said. "We’ve got 7th and 8th graders vaping. The schools is asking us to do something about it. We can’t stick our heads in the sand.”

Dana Stevens, Executive Director of Community Action, Service and Advocacy (CASA) didn’t mince her words on the failure of the El Cajon City Council to enact an anti-vaping ordinance.

“I was very disappointed to say the very least. The arguments that were raised (against the ordinance) were not meaningful arguments. We can’t just label everything as a slippery slope just because you can’t come up with a reasonable argument as a policy. That’s what was going on,” Stevens said.

She pointed out that the urgency to find a solution at that level has petered out. “At first, the White House was going to do something about this. Now all of this has changed and it looks like they are not going to do anything. It is time that we come to revisit the regulations. We’ve seen other cities all around San Diego County moving in that direction and the county itself has taken action.”

Steven’s organization, CASA (Community, Action, Service, Advocacy) is involved in many facets of community advocacy in the city of El Cajon. Under the direction of the City of El Cajon, it organizes regular “sting” operation checking local retailers observance of local tobacco and alcohol laws. It also works towards improving park and recreation accessibility for local residents.