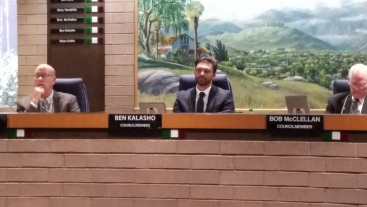 October 28, 2018 (El Cajon) -- El Cajon City Councilman Ben Kalasho did not get the answer he wanted to hear from his colleagues on Tuesday.

The El Cajon City Council voted 3-0 this week that it would not fork over $1,500 to reimburse Kalasho for his legal settlement with San Diego activist Mark Lane. El Cajon Mayor Bill Wells was not present due to illness, leaving the decision up to Mayor Pro Tem Gary Kendrick and Councilmembers Bob McLellan and Steve Goble. Kalasho was required to recuse himself.

Lane sued Kalasho for blocking Lane and others from posting comments on Kalasho’s Facebook page. The suit was based on a landmark legal precedent set earlier this year in which a federal court ruled that President Donald Trump could not block his detractors or delete their comments on social media, since this violates First Amendment free speech rights. 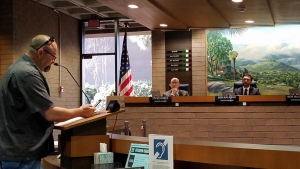 Kalasho contended that since he uses his personal Facebook page to communicate with constituents about official city business as an elected public official, he should be reimbursed for his legal costs.

In the proceedings, City Attorney Morgan Foley said that the key to determining whether to waive the city’s liability was whether Kalasho had practiced “malice” in the course of his Facebook activity. In a detailed presentation, Foley said that social media accounts can be a part of “a public official’s persona” even though an account is a councilmember’s personal page.

Lane has said although he has differences with Kalasho, the lawsuit was not about personal financial gain, but about defending free speech. “The lawsuit was against Ben Kalasho, not the City of El Cajon,” he said. He also disputed Kalasho’s claim that Lane was unable to post comments because of Facebook’s limit of 5,000 “friends” per account. He said that while having 5000 “friends” on Facebook stops an individual from adding new ones, it does not limit commenting in any way.

A federal judge signed off on a settlement between Lane and Kalasho in a joint motion for dismissal in early October. Kalasho agreed to pay $1,500 to Cory Briggs, Lane’s attorney. 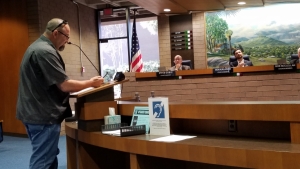 “The nature of technology has changed so quickly,” Foley told Councilmembers. “Public officials have faced these similar lawsuits even using their own personal accounts, where they use those accounts to reach to their constituents,” he added.

At the conclusion of the meeting, Kalasho once again blamed local journalists for publicizing his legal woes at the expense of concentrating on the issues affecting the City of El Cajon.

https://i.imgur.com/jhmI9he.jpg
Kalasho is popular in his mind only. I pulled this from his Twitter feed literally 1 minute ago. https://i.imgur.com/tqvqE0N.png He announced he would be running months ago, got just 1 like and that was probably his wife. How ironic that the wannabe thug who bragged about owning a 3-piece suit is, in reality, nothing more than an empty suit. One could bemoan the possibility that he may stain this city for another 2 years, but given the accusations of his filing 2 false documents with the county (2 felonies) he is more likely to be unseated while serving time behind bars.
Kalasho posted a scathing YOUTUBE video on this subject - 10/26/2018 To view his uploads (30 in total - with only 81 views combined), go to: https://www.youtube.com/playlist?playlist=UUeRzHu_N_8HrTnyNcVxQsTQ