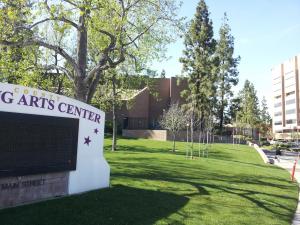 August 13, 2014 (El Cajon)-- At yesterday’s El Cajon City Council meeting, members voted 4-0 to move forward with discussions on a partnership between the East County Performing Arts Center and the Rock Church. Pro Tem Mayor Gary Kendrick recused himself from this agenda item because of a “financial conflict of interest.”

The proposal drew strong support from church members and local business interests, but garnered strong opposition from some arts supporters and citizens concerned over constitutional issues.  Today, Karen Marie Otter, an El Cajon resident and former Congressional candidate, informed East County Magazine that she has sent a letter of complaint to the County Grand Jury asserting that she believes the deal violates the First Amendment of the Constitution, which requires separation of church and state.

At the meeting, City Manager Doug Williford gave a PowerPoint and praised the Rock Church plan as  “the finest proposal ever made to the City.” The City had received a proposal from Christian Youth Theater back in February, as well as the proposal from Rock Church. These were discussed in closed session.

Rock Church proposed using ECPAC for 132 days per year, paying annual rent to the city of $216,000  with a five year option, and a 2% annual rent increase—bringing roughly a million dollars into the city’s coffers. The church plan also calls for construction of a two-story, 20,000 square foot building with a rooftop facility in the civic center plaza that the city could access ; after 30 years the ownership would transfer to the city.  The new building would include a catering quality kitchen and a VIP/reception room that could be used for entertainment and conference needs over the long term.

Staff recommended that Council direct staff to negotiate with the Rock Church for a final draft to bring to the Council. The draft would be expected to be ready between 60-90 days.

Mark Stevens, chief operating officer at the Rock Church, was the first to speak from the public. “We have outgrown [our facility],” he said, calling the deal a “ win-win situation.” The church would hold services for its members in ECPAC on Sundays. When Mayor Bill Wells asked if Stevens had any concern about the parking here, Stevens told him they’d use the parking lots and stay off the streets. When Councilmember Tony Ambrose asked what other days, besides Sundays, would the facility be used by the church, Stevens responded that it would be used for “practice for worship band Tuesday nights [and] a conference on Friday or Saturday.”

The City Manager later clarified that ECPAC would be available for the public to rent out 75% of the time.

Ray Lutz from Citizens Oversight, who also led a Save ECPAC group that has fought to reopen the theater and have it professionally managed, was strongly opposed.

“The City Manager has told us no plans for the theater. No plans! You guys didn’t look for other ways to use the theater… Is there going to be a sign now that says ‘Rock Church’?” he asked.  Lutz also raised constitutional concerns over separation of church and state. “ You guys aren’t allowed to pick one church over one another.”  Lutz has also called for the City to honor promises made by the City Manager to bring in a professional management team before locking in any long-term leases.

Dustin Holum, a resident of El Cajon, was opposed. “I was hired to join the technical team at ECPAC,” he said, adding that his dream is to see it reopened. “Please do not enter into an agreement with the Rock Church.”

Ivan Andujar from East County Transitional Living Center had good things to say about the Rock Church. “We’ve worked with the Rock Church in the past… We see them as an asset in the downtown area.”

Debra Childers, who runs Feeding the Flock Ministry at the Rock Church, told Council the program has expanded eight times since starting in El Cajon last November.  According to their website, Feeding the Flock helps feed more than 100 elderly shut ins, low income families and homeless in San Diego East County every month. She said the Rock Church proposal would be an asset to the community.”

Robert McFaden, who works in El Cajon, said his wife had memories of their kids performing in ECPAC when it was opened in the past. He would want other families to have that experience as well. He told Council to “pursue an agreement with the Rock Church” to help get the facility reopened, which has been closed and in need of repairs for several years.

Ronnie Holderby  voiced support, stating, “This is a valley of opportunity” and adding that reopening the theater and bringing in the Rock Church would allow “El Cajon businesses to flourish.”

Ricky Page, Council pastor of the Rock Church, said, “I want to encourage you to move forward with the partnership,” adding that the church holds five services on Sundays.  This would bring in an estimated 4,500 people to downtown.

But Bonnie Price, who worked with Ray Lutz to create a proposal for ECPAC in 2012, has taught constitutional law and strongly opposed the deal. “We did not have in mind having a church,” she said of the Save ECPAC proposal that the city did not adopt. “I believe it’s unconstitutional to entangle city government with a church… This must be resolved before moving forward.”