Council voted unanimously in favor of sending Pro-Tem Mayor Bill Wells and Councilmember Gary Kendrick to meet with two representatives from the Grossmont Union High School District (GUHSD) to discuss feasibility of refurbishing ECPAC and also constructing a multi-use facility in front of the theater. Together, the two facilities would serve as a magnet for arts and culture in East County under the vision put forth by supporters.

Councilman Gary Kendrick spoke in favor of the plan. “I’m open to re-opening this. We need to fix the roof and take care of ADA issues. I spoke with Priscilla Schreiber (current GUHSD board member),” he explained. “The topic of ECPAC came up. Her idea is for the district to build a multi-use facility in front of the performing arts center rather than 10 multi-use facilities on each campus.”

He added that “75% of the shows at the center (ECPAC) were less than 500 people in attendance. We have other performing arts centers competing with us. I’d like to see the theater open every day with something happening. This multi-use facility would complement, not duplicate, the performing arts center. We’ve got a fantastic facility right now.”

Wells suggested the proposal should not be controversial.  “We have a theater that’s expensive to run. This time, we’re looking at re-opening it in a timely manner that’s most cost-effective to taxpayers’ dollars. The district plans to build 10 performing arts centers. Why not just partner with them? They can use it,” he said of the facility. “This board has had informal decisions [and voted] to go to formal negotiations.” He added, “We are currently working on a proposal to open up on our own.”

Mayor Mark Lewis agreed with both councilmen. Then he made a motion. “I’d like to nominate Wells and Kendrick with a staff member to assist.”

All council members voted in favor.

During public testimony, Ray Lutz from Citizens Oversight Committee  spoke about a “blueprint” submitted last year by  the Save ECPAC group that he led. “We did quite a bit of work on it,” said Lutz, who has disputed cost estimates for repairs.  “You could open it today. It’s in good shape. You’ve got people saying, ‘The grass isn’t greener. Let’s talk about it forever.” Instead of partnering with the school district, Lutz urged Council to “be successful on your own. That’s what I challenge you to do- open up the theater.” 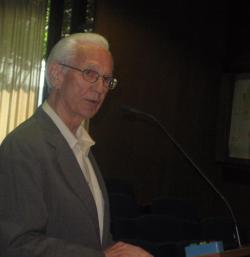 Developer Art Ballentyne also shared his view. “I urge you to be more involved caretakers for this treasure.”

Kendrick spoke with ECM after the meeting to give more details. The cost of repairing the roof is “negotiable. The city would repair the center and the high school district would build the facility in front of the center [on public ground],” he revealed, a major change from just a year ago, when the city lacked funds to do the repairs.  Now, repairs would be funded through “money set aside from the sale of the old police station property on Fletcher Parkway,” Kendrick explained.

He later informed ECM that city revenues are also increasing due to rising sales tax revenues as the economy improves, including a substantial increase in car sales, providing additional funds that could potentially be utilized.

Kendrick hopes the arrangement will make the facility more usable, benefitting both the school district and the city, as well as the public. Students could also benefit because they could “run the equipment from the center and get experience,” he concluded. “Everybody wins.”