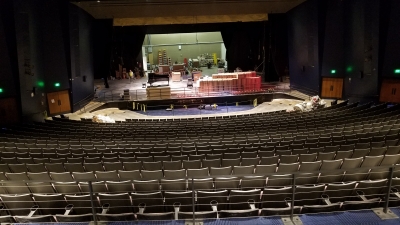 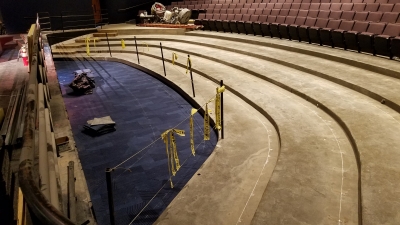 After numerous false starts and stops in the theater’s 40-year history, city officials believe they have finally got it right with Live Nation’s upcoming management. The theater has been closed for more than a decade, in need of costly repairs and professional management. The city has recently invested  $8 million in the remodeling project, with most of those funds paid from sale of the former El Cajon police station property. 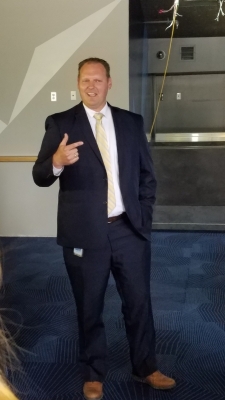 A new copper-toned roof and a large magnolia tree being planted out front will herald entry to visitors. The first thing patrons entering the theater will see is a full bar in the main lobby and a gleaming gold “M” logo. Seven portable bars around the building will also serve patrons.

Among the big changes that audiences who have attended shows here in the past will notice are that the theater which formerly had 1,142 seats in 27 rows now has 1,210 seats with cup holders; the first six front rows have also been upgraded with plush seats. A removable cover on the orchestra pit provides space for 68 seats in two new rows.

The back of the auditorium, which was formerly occupied by the light and sound control booth, has been upgraded to a VIP lounge for a unique experience during events. The last few rows of chairs will also be modified to allow room for standing or sitting, depending on the event. 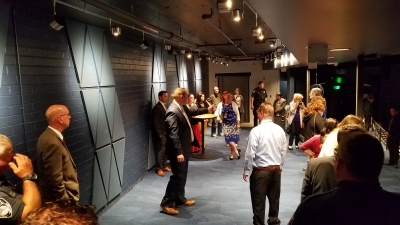 The theater has upgraded men’s and women’s restrooms in the foyer. A newly installed elevator will also be available to take patrons to the upper sections of the theater. Epperson noted that the designers wanted to make sure that it always looked as though it has always been there.

Major changes have been made behind the scenes, as well, including a new gold Austrian front stage curtain that can change colors with lighting, and a new energy- efficient LED digital stage lighting and sound system. The backstage artist rooms and dressing rooms have also been revamped. 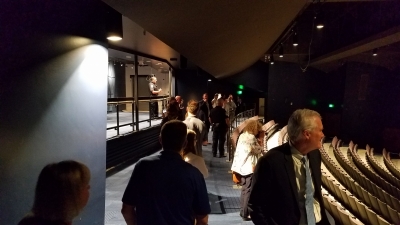 The theater’s architect, Los Angeles-based Rios Clementi Hale Studios, was also able to create a special backstage space designed to meet the needs of traveling bands or other performers and their staffs including comfortable dressing rooms and laundry facilities. Dedicated RV power outlets for tour busses were alo developed. New fire-retardant impregnated inside stage curtain legs and wings and background cyclorama are also a part of the theater’s revamped and modernized stage equipment. 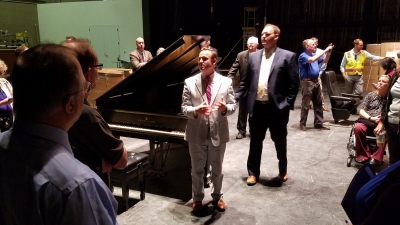 Before leading the group into the theater, Dirk Epperson, El Cajon’s Director of Public Works, apprised the Council with a timeline of the theater’s reconstruction starting when the Council approved the initial agreement directing former City Manager Doug Wiliford to begin negotiations with LiveNation in Dec. 2017. Weiland Construction received a notice to proceed with the construction project in Aug. 2018. 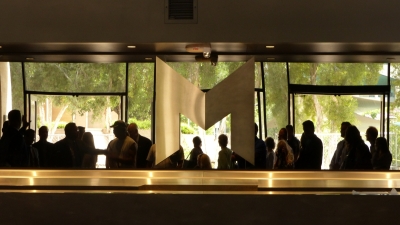 That’s welcome news to theater patrons, who once feared the performing arts center could be torn down. The city once considered a proposal from a developer to tear down the theater and erect a hotel. But after ECM broke the story in an exclusive report on that proposal, arts lovers staged a protest outside the next City Council meeting and the city opted to save the theatre, which has long been heralded for its excellent acoustics.

Those acoustics were evident during the tour, when the theater’s original Steinway grand piano was played onstage, filling the theater with its rich resonance. 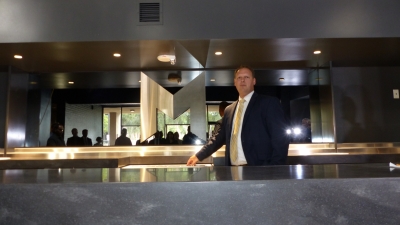 The facility will be commissioned in August and then LiveNation’s marketing personnel will be brought up to speed on the project. “We’ll have a grand opening with acts in August and the full season of shows will begin in September,” Epperson disclosed.

A full announcement of the upcoming season will be made at a press conference on July 15.

ECM, however, has learned that one of the shows to be presented at the theater will be a Buddy Holly/Roy Orbison Hologram Show on Oct. 1 at 7 p.m. Accompanied by a live band and back-up singers, the “concert experience” will feature a cutting-edge performance by hologram and remastered audio evening of Roy Orbison and Buddy Holly’s greatest hits onstage. 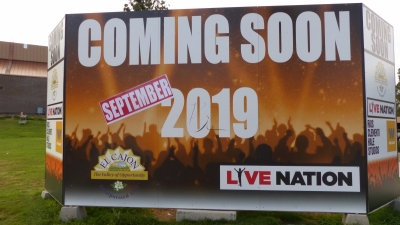 On returning to the council chambers when the session was restarted, councilman Bob McClellan said, “I’m sure the restaurants in the community will be so happy we’ve got so many people coming in to the downtown area on show nights.”

City councilman Gary Kendrick, who has spearheaded the effort to reopen the theater stated, “We finally have a world class performing arts center.”

In other City Council actions, $430,000 from the city’s wastewater fund is being directed towards the advanced water purification project being developed by the Padre Dam District. ECM profiled the project in an article last May.

The council also discussed a staff recommendation for increasing salaries for mayor and council members, which have not been raised in 16 years. Salaries are lower than what is being paid to council members and the mayors of La Mesa and Santee. 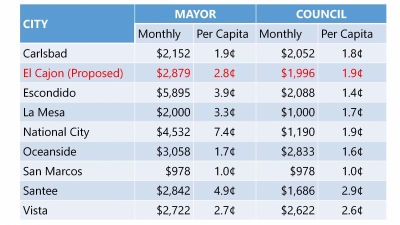 Councilman Steve Goble objected. “We always have to take into account the interest of the public. I get heebie-jeebies when you give yourself a raise. I have a fundamental problem with giving myself a raise,” he said.

He then suggested that any raises should be decided by a salary accountability board or independent commission.

Kendrick said, “A lot of us spend 20 hours a week on this and also serve on regional commissions. Someone with modest means on an hourly wage might say `I can’t afford to run for this.’ Future councils and employees should be paid at market.”

The newest member of the Council who was recently appointed, Phil Ortiz, noted,“You can’t survive on a Council salary.” Nothing that the job takes “a lot of work,” he said of the proposal, “I think it serves the public…I feel comfortable keeping it at the median. 16 years is a long time without a raise.”

With Goble opposed, the council voted four-to-one to approve a city staff report on the proposed raises.