July 23, 2014 (El Cajon)- At yesterday’s El Cajon Council meeting, Council had a public hearing on electronic cigarettes and hookahs, then voted unanimously to outlaw hookah lounges in the city.  One existing hookah vaping lounge in the city will be grandfathered in as a legal but non-conforming use, however no new facilities will be permitted. 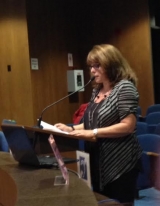 The city has also prohibited smoking e-cigarettes in places where other tobacco products are already banned. Last night, Council voted to continue allowing merchants to sell e-cigarettes to adults for the existing $675 fee and conditional use permitting, subject to inspections to assure that the products are not being sold to minors.

Staff members indicated they had studied ordinances in San Diego County, La Mesa and Del Mar, as well as getting input from Communities Against Substance Abuse (CASA) and from the community.

The first to speak was Frank Tsimboukakis, candidate for State Senate.  He called electronic cigarettes  “a Trojan horse of the smoking industry… I strongly urge you to say no.”  Tsimboukakis noted that Mayor Bill Wells has taken money from businesses that sell tobacco products and asked him to recuse himself from voting.

Grossmont Union High School District board member Priscilla Schreiber stated, “I’m in strong support of the resolutions,” adding that the district has prohibited all nicotine and tobacco products, educating students on the risks.

El Cajon resident Katherine Webb spoke next. “We turn to you, our administrators within the city, to guide our children on the right path.” She added that she has twin grandsons, who go to Montgomery Middle School and have seen kids smoking vapor devices. “Vaping lounges and hookah bars should not be close to schools,” she testified.

A church youth leader, Barbara Gordon, also encouraged Council to pass the resolution. “There’s a significant nicotine risk with these products… I applaud Council for addressing this issue.”

El Cajon resident Helen Riffel noted that vaping devices come in “all kinds of flavors” that appeal to kids. She added that she works for the local school district and she’s seen kids “stealing these products and trying it.”

Chantel Razoukhi, who is 24 and has been a customer at hookah lounges, voiced opposition to the measure. “I’ve seen all these young people [there]. It’s a place for them to be safe,” she said, adding that like movies and youth activities, hookah lounges keep youths from “getting into gangs or alcohol.”

But Joe Kellejian of the American Lung Association testified that the ordinance is needed to protect youths as well as the health and welfare of all citizens.  He mentioned he was in Hawaii recently. He saw a hookah lounge in a kiosk store and the store owner didn’t pay attention when the adults came in. But, when the kids came in, the owner came up to them and entertained them. He showed them movies. He took a picture of this on his phone and he showed the staff and Council.

Dr. Suhail Zavaro, a practicing cardiologist in El Cajon, presented a paper on the topic of ‘Toxic Effects of Nicotine.’ “Nicotine is a strong addicting substance,” he said, adding that when a person stops using nicotine, they experience withdrawal symptoms. “They do contain other additives. E-cigarettes cause dry cough and irritation in the throat,” he said of e-cigarettes, adding that these can lead to addiction. He cited other major health effects including constricting arteries in the heart and brain, which can lead to heart attack or stroke.  “I strongly recommend prohibiting use of these bad substances,” Dr. Zavaro concluded.

Councilmember Bob McClellan mentioned his sister has been smoking for 60 years. She now has stints in her legs. “I’m totally in favor of this ordinance,” he said, also calling for annual inspections of businesses selling e-cigarettes and vaping products.

Kendrick added, “I’d like to see the strictest policy possible… This ordinance has been a spectacular success in saving lives of our children.”

Councilmember Tony Ambrose said he would support the ordinance, but added, “I prefer we retain planning commission’s [decision] for no outdoor areas.” McClellan agreed and also suggested having more than one inspection.

Councilmember Star Bales agreed. “Right now, my dad is in the ICU with tubes in his mouth” with a lot of other patients because they’re heavy smokers, she disclosed. “Was anyone there for my dad? I guess not. He started when he was a teenager.”

Wells said he would vote in favor of the measure because “this is what the people want.”  He added, “My dad died from smoking. But I have other family members that died from obesity.”

Kendrick summed up the sentiments of nearly everyone present, voicing support for protecting kids and all El Cajon citizens as he made a motion to pass the measure.“I think we all have the right to breathe clean air.”

Interesting. So the E.C. council has its collective head as far up its fat a** as La Mesa's. Lesson: Never underestimate the power of politically correct groupthink.