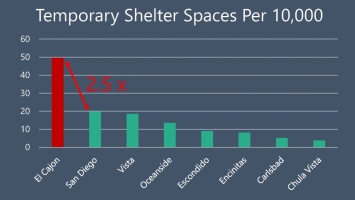 January 27, 2020 (El Cajon) -- El Cajon City Manager Graham Mitchell has challenged other East County cities and the County of San Diego to address the current crisis level of homeless individuals, as El Cajon has during the past year.

In an overview of its efforts at the first council session for the year, Mitchell told councilmembers that the city has spent $640,000 on programs directed to people who have made El Cajon streets their home. While the city will be spending that much again this year, Mitchell challenged the smaller cities around El Cajon (Santee, La Mesa, and Lemon Grove) to make similar efforts.

“We are doing far more than what our neighbors have been doing,” Mitchell said. 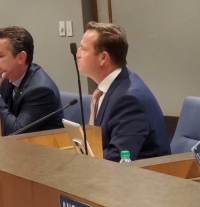 While El Cajon has the most homeless individuals in East County, Mitchell spoke of his concern that La Mesa, Santee, Lemon Grove and the County of San Diego do not have shelter facilities. “There are a couple of absent names,” he said. 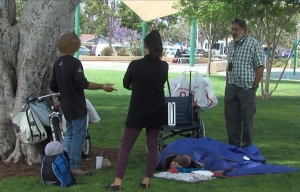 Although the two cities which are smaller than El Cajon may be deficient in offering services, he said that the city has a willingness to work with them to develop such services for homeless individuals utilizing their experience with the issue.

“The city can’t do this on its own,” said Councilman Phil Ortiz. “I would like to see our neighboring cities and the county to come together to have a regional plan similar to that of North County,” he said. “The State of California also needs to treat this like a crisis and I would like to see more attention brought to this topic from leaders in Sacramento.”

While such an effort by smaller cities at this point has been voluntary, California Governor Gavin Newsom’s taskforce on homelessness has recommended a “mandate to end homelessness” that could end up on the November election ballot.

The task force has declared that moral persuasion and economic incentives aren’t working to bring people in from the sidewalks and has urged the California State Legislature to put a state constitutional amendment on the November ballot. The measure would force cities and counties in California to take steps to provide housing for the 150,000 Californians who la 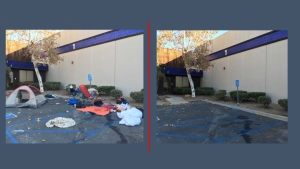 ck it, or face legal action as a part of a “legally enforceable mandate.” 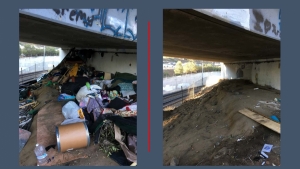 Such a measure requires a two-thirds vote of both legislative houses to be brought to voters or alternatively, a massive citizens’ signature gathering campaign.

ECM's editor, MIriam Raftery, contacted the Governor's press office last week to ask whether the task force's proposed constitutional amendment would make allowances for smaller cities with limited budgets, such as Lemon Grove, or for cities that have already invested substantially in creating shelters and services for the homeless, such as El Cajon. The Governor's office did not respond, however, by the deadline provided.

Photos, left and right: El Caon has worked to clean up trash left by homeless

Officially, El Cajon has East County’s largest homeless population with 787 homeless individuals, of whom 489 were sheltered, according to the 2019 Point-In-Time conducted by the Regional Task Force on the Homeless  last January. In La Mesa, 46 homeless people were counted; Santee and Lemon Grove each had 35 homeless people counted. 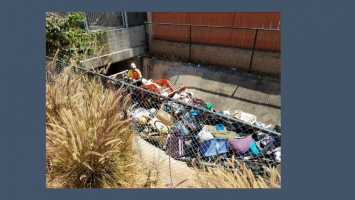 The count  found 224 homeless people in the county’s unincorporated areas—and all of them were unsheltered. In the unincorporated region, the count included only Alpine, Crest, Dehesa, Fallbrook, Lakeside, Ramona and Santee, leaving some communities uncounted in areas such as Julian, Campo, Potrero, Jamul, Jacumba and other places.

East County's four cities plus the county's unincorporated areas had 1,127 homeless people on its streets according to the count, though the total is likely higher since not every area was counted, particularly in rural and mountain communities, and even the best counts may miss some individuals.

Photo, left: a worker clears away debris left by homeless

This year’s homeless count by volunteers throughout East County took place on Friday morning. Results from that count will be announced in several months.

Mitchell said that the City has two goals in addressing the homeless issue. 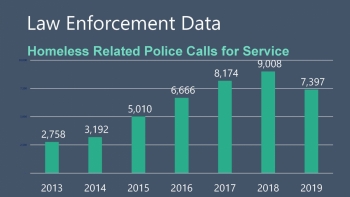 There are two overarching goals for the homeless program we have. One is to providing permanent housing for those who are in our community. The second is to address the impact of homelessness and the negative impact of homelessness, such as preserving neighborhoods, parks, and other municipal amenities,” he said.

Specifically, the city has funded seven programs through El Cajon Housing Connections,  the Crisis House non-profit agency, A Way Back Home program through the Salvation Army, shelter services and a clean streets program administered by the East County Transitional Living Center, and two task forces through the East County Homeless Task Force, under the guidance of the East County Chamber of Commerce.

“This has been the clearinghouse of great ideas,” Mitchell said. “It is a way for thoughts to be vetted and been a great place for the community to come together.”

Up to now, El Cajon has been the principle funder of the task force and has not been able to get the cities of Lemon Grove, La Mesa, Santee and the County of San Diego to participate as equal partners.

Mitchell pointed out that the city’s successful partnership with a local non-profit, Crisis House, working as a “housing navigator,” utilizes an annual budget of $150,000 using housing assistance funds from the city. 86 individuals and 55 households have been permanently housed since 2017 through their efforts.. 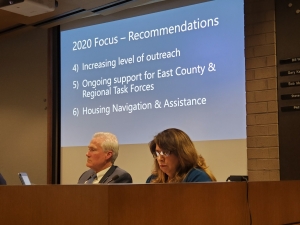 The city funding of a program called “A Way Back Home” through the Salvation Army has brought 73 individuals back to their families throughout the United States.

Through the East County Transitional Living Center (ECTLC), the city has paid for 2000 nights of housing at the location of a former motel.  ECTLC plans to expand its outreach by building two dormitory style buildings and remodeling 40 of its existing rooms opening the door for 40 to 50 new families and over 100 children. It offers longer shelter services and job training to those individuals who make a commitment to follow its religious programming and rigid rules, but the city funds only the secular, not faith-based portion of the program.

The programs have been mostly praised, but one has drawn some criticism.  In an interview with the San Diego Union Tribune, Bradley Russell, a homeless outreach worker at the McAlister Institute which provides substance abuse treatment and education, criticizes the city with its heavy reliance on ECTLC to provide homeless services which some say that it is off-putting for some individuals.

He said that “ECTLC is not always the right place for every homeless person because those who need a stay longer than four weeks are not allowed to do so unless they take a Christian-centered lifestyle.”

Councilman Gary Kendrick has previously told ECM that the city would consider a similar long-term secular program if an organization were to bring a proposal to the Council.

Still, El Cajon is doing far more than its neighbors – including the county, which has turned a blind eye to the needs of homeless encamped along riverbeds in Lakeside, Spring Valley and elsewhere.

By itself, City of El Cajon employees as volunteers makes an average of 20 contacts with homeless individuals every week. They are offered services and contacts with other service providers.

He also acknowledged the many “helping hands” who have also participated in various programs on their own. “It is not just these seven programs funded by the city of El Cajon. There are many organizations, entities, individuals, groups, churches, that have a passion for this and want to make a difference. They reach out.”

ho were recently incarcerated. “He reaches out to them and tries to make connections to other service providers before they are released. They have services waiting for them or housing opportunities.”

But it also has done what Mitchell said “quite a bit of cleanup” around the city. He showed a water channel which goes under a city street which was filled with debris left by homeless individuals. In the past year it has collected 176 tons of debris from water channels, streets, sidewalks, parks, and creeks.

Homelessness is on the rise for many reasons including lack of affordable housing, inadequate mental healthcare services, drug and alcohol addiction issues, domestic abuse, returning veterans unable to find jobs, and new laws requiring release of low-level offenders from prisons.

In the past, Sheriff’s sweeps occasionally cleared out homeless camps and law enforcement in some jurisdictions would ask homeless camped on sidewalks and in parks to go elsewhere. But the recent Supreme Court decision upheld a Ninth Circuit Court of Appeals ruling, which found that homeless in Boise and elsewhere have a right to sleep in public places if no shelter is available.

So a punitive approach is no longer an option for communities grappling with homelessness. Mitchell hopes more cities will join El Cajon in taking a humanitarian approach to the problem, providing shelter, services and a hand up to help get people off the streets and into homes.

The city has been investing in programs that are not helping the problem. We need a transitional storage units.