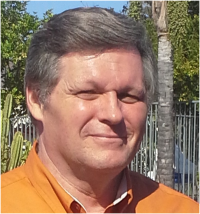 If elected, Wright says his main priorities will be: 1) to attract new businesses to the city and 2) get people that aren’t working back to work, which will help the people and bring additional tax revenue without the need to increase taxes. He says he will work closely with Council to find new ways to attract new businesses, to locate businesses that will offer people better paying jobs. This is what he’ll also do as far as addressing the high poverty rate in El Cajon and bringing better paying jobs,  as well as addressing the needs of homeless people within the city.

He believes the top three issues facing El Cajon are:

1)” Ebola is something that we’re facing like most cities in the U.S. and we need to prepare an emergency plan. I’ll check the emergency preparedness plan and help the city council with the necessary revisions.”

2) “We need to find a way to handle the panhandlers that are in El Cajon because some are very aggressive. I’ll help establish a plan that will provide panhandlers with a legal alternative income plan.”

3) “Homelessness in El Cajon and it’s my intent to not just help get them off the street but to come up with a better plan that should include training to help keep them from becoming homeless once again.”

As for his views of what’s currently going on in El Cajon, he states, “It’s great that we’re starting to see programs taking off,”citing HauntFest on Main Street, the Farmer’s Market and Mother Goose Parade as examples.  “There seems to be some activity for just about everyone.”

He says he differs from his competitors and incumbent in that he’s open minded and willing to ask people and listen closely to what they have to say in regards to the city’s need for the future.

As far as his views on ECPAC and the city’s proposed deal to lease it to the Rock Church,  he states, “Leasing the performing arts center is an excellent idea and should help keep the building maintained as well, but I would not limit its use to being just a church. The performing arts center has been a source of revenue for the surrounding businesses in the past.”

He agrees with Mayor Wells on many issues. “The current Mayor has an excellent track record and I agree with his views and insights in regards to our city’s future," Wright says.

El Cajon faces challenges with many refugees and immigrants from Iraq and possibly more to come given the situation in Iraq and ISIS. As far as ideas to help newcomers transition to life in America and how the city will cope with the influx, Wright responded that the influx “could put a strain on the city’s resources if we’re not properly prepared. Henceforth, we will need to prepare for the arrival of any new immigrants” but he did not provide details.

For his views on El Cajon’s recently enacted ordinances regulating alcohol and e-cigarettes, he says,  “Since no one knows what the health ramifications are going to be from the electronic cigarettes, the City Council acted appropriately in enacting a new ordinance. We should all be concerned in keeping alcohol out of the hand of minors and those whom seek to abuse it.”

He is currently being endorsed by Supported Training Employment Programs for Success.

His last thoughts are: “I’m considering running for Governor of California sometime in the future.”

To learn more about Wright, check out his website: http://www.thejonathanwright.com/.

See an article about our interview with Mayor Wells: http://www.eastcountymagazine.org/mayor-wells-shares-views-future-exclusive-ecm-interview.  Theweny has not responded to our request for an interview.