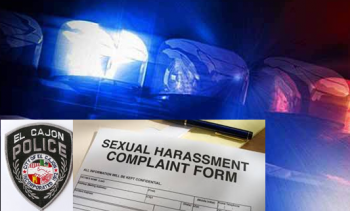 April 3, 2015 (El Cajon) – In response to reports of multiple sexual harassment  and sexual misconduct claims against the El Cajon Police department through the years, we asked City Manager Doug Williford how many women are on the police force, including management. We also asked what policies have been put in place that aim to prevent sexual harassment.

Williford sent our request to Jim Lynch, director of human resources for the City of El Cajon. Lynch provided this response:

·       Of the 122 sworn officers, nine are female; of the 67 non-sworn employees in the department, 55 are female. None of the 10 sworn management positions are female.

Second, in addition to compliance with the biennial (every two years) training required by Government Code Section 12950.1, many staff members in the City’s Police Department have also participated in the following training courses/programs that include some attention to sexual harassment issues:

a.          All officers are required to complete four hours of training on ethics/workplace harassment in the Basic Police Academy before they even become sworn members of the El Cajon Police Department.

b.       A 16-hour program by the Josephson Institute called “Honoring the Badge” was presented to the El Cajon Police Department in late 2007/early 2008.  It appears that this class included the issue of methods of addressing sexual misconduct in the law enforcement environment.

c.        Law enforcement ethical issues, including the prevention of sexual harassment, are often the topics of supervisor-initiated shift training meetings in the El Cajon Police Department.

e         Ethical issues, including the prevention and reporting of sexual harassment, are discussed extensively in the Supervisory Leadership Institute (SLI).  Most El Cajon Police Sergeants have attended the SLI.

f.        There is a four hour component on ethical training in the POST Management Course that all El Cajon Police Lieutenants are required to attend.

g.       Chief Jim Redman recently addressed the results of the City of San Diego’s Police Executive Research Forum's (PERF's) report with his command staff and directed them to discuss the contents with their subordinate staff.  The report focused on the perceived deficiencies in the San Diego Police Department relating to sexual misconduct and recommendations on how to address them.

The rest of the story, untold, is how many sworn female officers have applied for management positions. What if only 1 did last year? Then we get into areas you and I aren't privvy to such as her ability and qualifications to become a manager.
when asked how many women are on the police force including management, passed the buck to HR who refused to answer directly the second question. So we must surmise that the answer to how many women on the police force (not counting administration) are in management is -- none, zero, zip. And then in a response on policy the HR director went on about training and discussions. So the El Cajon PD has four problems. 1. The behavior problems of police officers are apparently exacerbated by the fact that there are no female officers in management positions. 2. The City is reluctant to admit the fact that there are no female officers in management positions. 3. The City of El Cajon does not have policies in place (such as zero tolerance) that aim to prevent sexual harassment, it only has training and discussions. 4. The City manager isn't really interested in police department sexual harassment.