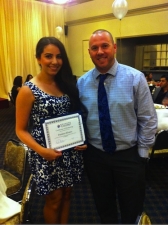 “It’s such a treat for us to welcome these new Americans,” said Advanced Training Education Coordinator Steven Howard. “I’m enjoying the opportunity to watch them learn and grow.  These are some hard working people.  They seem determined to make the most of life in this country.”

The Chaldean community is comprised primarily of Christians who were displaced from their homes in the country of Iraq during the Gulf Wars.  El Cajon is home to the country’s second-largest Iraqi immigrant community after Detroit. At least 40,000, and perhaps more than 50,000, Iraqis live in El Cajon. More than 13,000 of them have moved here since the Iraq War began in 2003, according to the State Department.

The scholarship was awarded to Paulina Khairo, who graduated this year from West Hills High School.  Khairo is a communion teacher who participated in catholic club, multicultural fair, and served as V.P. of the West Hills debate club.  She will be attending San Diego State University in the fall.

The scholarship was awarded at a graduation ceremony for Chaldean students, held at St. Peters church in El Cajon, CA.

Advanced Training Associates also gave a letter of intent for a scholarship for any of the school’s diploma programs for any Chaldean student, worth up to $12,000.  Chaldean community leaders and/or The Knights of Columbus will choose the recipient.