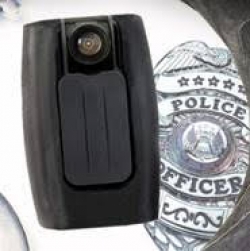 Kendrick says the camera “protects everyone and it is a true record of what happened,” UT San Diego reports.  He estimates the devices would cost $75,000, excluding cost of storing the video data by an outside contractor such as a cloud site.

President Barack Obama this week announced he is asking Congress for funds to buy 50,000 body cameras for police across the nation, so potentially some federal funds could become available. Some studies have shown that when body cameras are worn by police, public confidence in law enforcement increases and crime decreases.

Mark Arabo, a leader in the Iraqi-Chaldean community, stated in an e-mail to East County Magazine,  “The Chaldean Christian community welcomes the prospect of having our police department wear body cameras. Safety is a two sided relationship when considering these recording devices.W e must have responsibility within the police force, but we must also expect public accountability.”

He added that the devices help keep streets safe and neighborhoods secure.