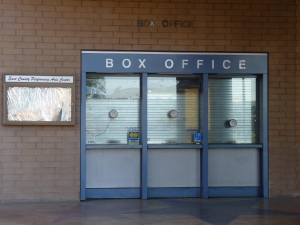 March 10, 2015 El Cajon)--El Cajon’s City Council voted unanimously on Tuesday to start the bidding process for long-awaited repairs needed to reopen the East County Performing Arts Center,, which has been closed for over five years.   Staff estimates the repairs will cost $2.92 million dollars.

Ray Lutz, founder of the Save ECPAC group that has been striving for years to see the theater reopened, asked during the public comment period what renovations would entail.  “No one’s really been able to review this,” he said, asking if the city had negotiated any improvements to accommodate the Rock Church, which  is slated to lease the theater on Sundays and designated other times.

City Manager Douglas Williford assured that the renovations were “fully vetted” 18 months ago and include roofing, Americans with Disabilities Act compliance, lighting, stage improvements, concession stands and entry area upgrades.  He assured that the repairs are needed regardless of who will use the facility and that no special requests were made by the church. The public will have an opportunity to weigh in when the bids are received, he added.

After the vote, even Lutz, long a vocal critic of the city’s policies regarding the theater, applauded the action.