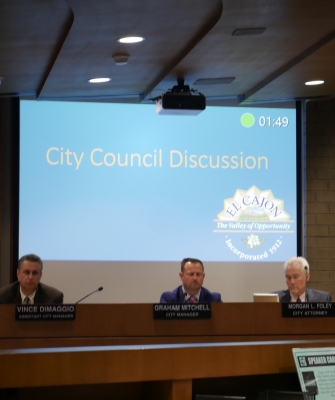 First, City Manager Graham Mitchell spoke about a rare opportunity to temporarily over-staff the police department with 10 new officers drawn laterally from other nearby agencies, in an effort to save the city money over the next three years.

According to the San Diego Union-Tribune, as many as 160 San Diego police officers may be facing termination in light of the city’s vaccine mandate. Meanwhile, El Cajon does not currently have such a mandate.

Mitchell told the Council that El Cajon has 94 police officer positions with six vacancies. After filling the vacancies and hiring the additional 10, El Cajon would have 104 officers – but that number would gradually return to 94 a few years after the proposed infusion as officers naturally retire or leave. In their place, though, would be the 10 already fully trained officers who needed no expenditure from the city to get them ready.

“We think there’s a savings of about $1.5 million, from personnel costs, training costs, and other things associated with academies,” he said.

Personnel costs can include background checks, psychological tests and other vetting procedures that these 10 officers will have already passed at their previous jobs.

In the staff report on the agenda item, Mitchell also wrote that, “The temporary addition of officers will help the City reduce response times to both emergency and non-emergency calls, increase patrol and police visibility, and expand or create additional units to address contemporary public safety concerns.” 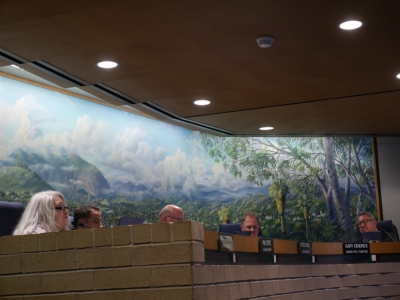 They then unanimously opposed the mileage tax as proposed in the SANDAG 2021 Regional Plan.

Councilmember Steve Goble voiced his disdain for the plan and gratitude to County Supervisor Chairman Nathan Fletcher for speaking out against it as well.

“I’m certain that the Vehicle Miles Traveled tax is a disaster for the average driver in San Diego,” said Goble, “especially those in East County, where it’s a much farther drive to any kind of transit station.”

Political support at both the county and municipal levels of government for SANDAG’s proposed mileage tax to fund its long-term transportation plan have caved recently, with even prominent leaders at SANDAG speaking out in favor of alternative funding sources. SANDAG voted to approve the plan earlier this month without a funding source.

The officials on SANDAG must now also scramble to realign the plan to fit the California State emissions mandate by the end of the year, since the VMT tax was a large piece of their strategy to slash emissions.

Lastly, the Council returned to the discussion of supporting Microenterprise Home Kitchen Operations, or MEHKOs, which is a formal way for people with cooking skills to earn a living out of their house. The Council members listened to a presentation and input from the public on the promise of the concept.

Council learned how MEHKOs can be an inclusive way to test out a business model, especially for those who are tethered to their home. The program can also widen access to fresh and healthy food in areas that may otherwise be considered food deserts, and elevate a community’s health and safety standards as a whole.

“I think MEHKOs are actually what this country is all about,” said Councilmember Gary Kendrick.  “If we were to say no, that would just be a government overreach.”

Councilmember Goble agreed, swayed by the thorough checks and balances of the proposal. “It has all the protections,” he said.

While four Council members were on board, Mayor Bill Wells felt differently. “I’m very opposed to this. I think it’s dragging the city into third-world status,” he told the Council. “I’ll admit that I’m just not seeing it the way other people see it.”

The measure passed by a vote of four to one, a change from the initial opposition the group expressed when first presented with the idea back in October.

This meeting also had an emphasis on vehicle policy and its impact on those experiencing homelessness. Read more on that here.

" “I’ll admit that I’m just not seeing it the way other people see it.” " you would see better is you took your head out of tRumps butt
what is your idea for having electric cars pay for using our roads????