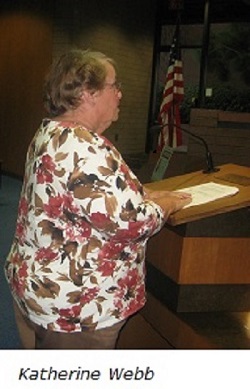 February 1, 2013 (El Cajon) -- El Cajon’s City Council voted 5-0 on January 22 to ask staff to draft options for an ordinance with tougher licensing regulations for off-site sales of liquor at markets and liquor stores.

“El Cajon has changed a lot since I was a kid in the 1960’s,” said Councilman Gary Kendrick, who introduced the proposal. “Unfortunately, as we grew, we acquired problems big cities had. One is alcohol abuse. We’ve struggled with it for 30 years now,” he said, adding that his proposal is modeled after ‘deemed approved’ ordinances that have, “...become very popular in cities that have it.”

The measure would allow the city to require new regulations, such as limits on advertising in store windows and fees for enforcement. Fees could be used to fund sting operations on vendors selling alcohol to minors or serial inebriates, and could also fund hiring a full-time police officer for alcohol-related crimes.

City manager Doug Williford advised that ordinances elsewhere have proven to be, “…very effective where they’ve been implemented. There is a lot of additional research that needs to be done.” He suggested that Council should consider future requests for licenses as well as looking at the unregulated existing liquor stores.

Katherine Webb, a long-time city resident, said she has seen the city change for both better and worse. “We still have a good city. We still have a diverse city. I find that along with immigrants, we find individuals that are unfortunate, like those abusing alcohol. We have way too many alleys for that. I think a deemed approved ordinance would be magnificent for the city, to limit off-site sales liquor.”

Kendrick pointed out, “This city has never been shy of looking at the health of citizens. We were the first city to come up with a tobacco license. We should go forward with this.”

Dana Stevens, Executive Director of Communities Against Substance Abuse, expressed her concern. “Thank you for taking the lead for this. This ordinance would give you authority to define the place and manner to carry out non-conforming licenses.”

Helen Riffel spoke next. “I’ve been a resident for the last 30-plus years. I have seen the negative impact of liquor stores- too much advertising (‘attractive nuisance’). I have two teens and I want them to go outside, but with a lot of liquor stores, it just doesn’t feel as safe for me.” 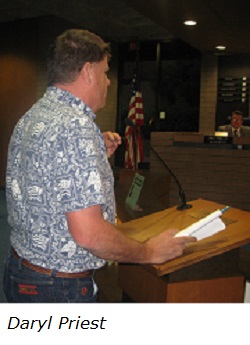 Daryl Priest suggested, “…a buffer around downtown. Speaking personally, I think this is a great idea. I grew up here. I think it’s time we do something about it. I like the idea of a fee with hiring a policeman.”

Councilmember Tony Ambrose agreed. “I think we should embrace it. This is imperative.” Councilman McClellan also concurred.

Kendrick provided more details on the ordinance, which could include a possible ban of fortified wine (wine that’s infused with distilled spirits and has very high alcohol content).  He would also like to see a ban on new liquor outlets and voice support for the buffer zone idea.

“What we’ve been doing hasn’t completely worked; we have a lot of drunk people in town,” he added. “I think penalties [for violations] have to be severe, like take away the license for two-three months. We need to stop this now; we have the ability to do that. We need to, if possible, create penalties for selling to the ‘do not sell’ list. I want most severe penalties we can obtain under California and federal law.”

Council voted to have staff draft an ordinance; Williford said he could come up with a report in six weeks.

Afterwards, Stevens spoke to ECM about what happened at the last meeting on January 8.  “There was an appeal to the decision of the Magnolia Family Market liquor license application of the planning commission. The council had denied the application a year ago. A lot of people spoke against another license, a type twenty, which is for beer and wine retail stores. Citywide, the city had way too many. The city had a moratorium on new licenses,” said Stevens, adding that the Alcoholic Beverages Commission has imposed a type-20 moratorium in El Cajon, Escondido and Encinitas. "The applicant, Arkan Somo from Arkan Somo and Associates, at the first meeting wanted a license despite the moratorium, which was denied again a year later. [Somo] was not happy.”

According to the city report, 564 alcohol-related crimes have been reported in that area; the rest of the city average is 154.  “There has been 360% more crime than other parts of the city. 22.7% crimes are alcohol-related.” Stevens said. “Why would you have another liquor license here?” The city has an obligation to look out for the entire population, he concluded.

Correction:  An earlier version of this story incorrectly stated that a moratorium had been issued in Santee.