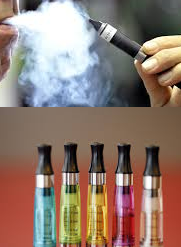 January 14, 2014 (El Cajon ) – After hearing testimony raising concerns over use of e-ciagrettes by children in public schools, El Cajon’s City Council unanimously asked staff to prepare a report on the hazards of  inhaling or “vaping” nicotine, along with options for regulation both e-cigarettes and hookah smoking.

Councilman Gary Kendrick introduced the issue, stating  that a friend told him her middle school son said that “use of electronic cigarettes was rampant at his junior high.”

A representative from Communities Against Substance Abuse (CASA) asked Council, “Can we really afford another generation of nicotine addiction?”  The CASA representative said that “nicotine is more addictive than heroin.” He presented evidence that manufacturers of e-cigarettes with nicotine are targeting minors with flavors such as bubblegum and designs ranging from e-cigarettes with cartoon characters to models that masquerade as asthma inhalers, felt pens, or other common devices.

Councilman Kendrick voiced fear that nicotine could be a gateway drug leading to use of illegal substances.  His fear is not unfounded; CASA indicated that some e-cigarettes are designed for use with hash oil or marijuana oil, enabling users to get high without producing the tell-tale aroma of pot.

CASA also revealed that some retailers are unaware that state law prohibits sale of e-cigarettes to minors since they do not contain tobacco, though do contain nicotine.

They also contain harmful chemicals such as formaldehyde.   The Centers for Disease Control indicates that use of e-cigarettes has recently doubled among middle school students nationwide.

Councilman Bob McClellan said he recently rode a trolley to La Mesa’s Oktoberfest and was offended by the smell of vapor from an e-cigarette user on the trolley.

Mayor Bill Wells indicated that regulation of e-cigarettes is “controversial” adding, “Even our conservative representative voted against regulation.”  The reference alluded to State Senator Joel Anderson, who received $3,900 in contributions from the tobacco industry during his last election campaign.

An El Cajon Valley High School student testified that she has seen students smoking e-cigarettes inside a classroom at her school.  (Note: ECM asked our high school intern about e-cigarette use, and he said they are commonly used at two  high schools he attended--even in the affluent community of Point Loma.)

Hookah smoking can expose users to 100 times more nicotine than cigarettes during a typical hookah session, also posing other risks.  Last week, a Spring Valley teen passed out and was hospitalized from carbon monoxide poisoning as a result of smoking a hookah.

“The primary responsibility of local government is to protect the public safety,” said Kendrick, adding that it’s especially important to protect children.

Kendrick noted that El Cajon’s strict tobacco ordinance has reduced the percentage of El Cajon retailers found illegally selling tobacco to children from 43 percent to less than one percent.  “That’s a huge success by any measure,” he said.

Staff will prepare a report documenting the potential dangers of inhaled smoking products including hookahs as well as e-cigarettes, then Council will weigh whether to expand its regulation of smoking to include e-cigarettes and hookahs.