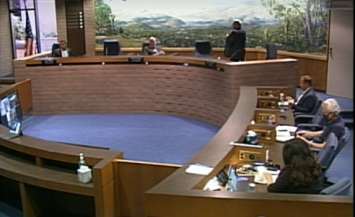 The Mayor indicated that on his Facebook page, however, he heard from many more people, most in favor if his plan.

In the end, the Mayor proposed a watered down motion that leaves enforcement up to the police chief and ciy manager, with some council guidance.

“The people of El Cajon are suffering,” the Mayor said in his opening remarks, citing business owners unable to pay their mortgage or rent and put food on their families’ tables. He also voiced concern over the psychological impacts of isolation and noted a rise in suicides during the pandemic. He called it  “nonsensical” for big box stores and schools to be allowed to reopen, while churches, indoor shopping malls and salons remained closed.  “I wanted to say that we as a city hear you…We are standing with you and for you,” the Mayor concluded. 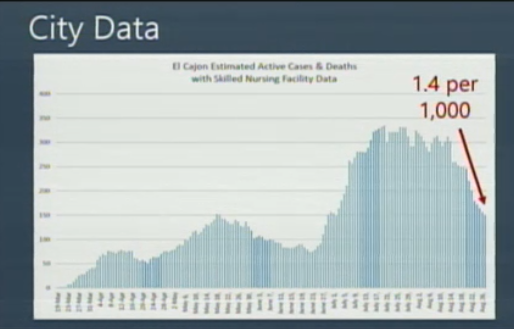 Staff made no recommendation, but City Manager Graham Mitchell gave a slide presentation and accused media of sensationalizing the worst numbers while not publicizing others.

El Cajon has about 150 active COVID-19 cases, according to Mitchell, or 1.4 cases per 1,000 residents. Excluding skilled nursing facilities, that’s less than 1 person per 1,000. Of those who died, 96% had underlying conditions such as high blood pressure, diabetes or heart conditions. He indicated that though the disease is serious, the local situation is improving since spikes in May-July.

He outlined the Governor’s new plan to let indoor malls  open at 50% capacity, hair salons and barber shops to open with modifications such as masks and sanitation requirements.  Indoor restaurants, museums, houses of worship and movie theaters can open at 25% capacity or 100 people, whichever is less.  Arcades and batting cages can also reopen at 25% capacity.

The city clerk announced that 46 public comments were received, including 11 anonymous comments all asking for mask orders to stay in place.  She then read the remaining comments.

Dean Britton said he was “extremely disappointed n our mayor,” adding, “Our city ranked 4th in the county for positive COVID cases. We are seeing a decrease, which he called appositive sign that nonessential businesses will be able to open safely soon.  He said the mayor’s plan “will make people shop and eat in areas nearby that have safety measures.”  He added that mental health issues should be addressed in other ways.

Another commenter voiced concern that without enforcement, “elderly residents will be fearful to emerge from their homes.”

Juliana, who did not list her last name, stated,”If you will no longer enforce COVID-19 health orders, I will no longer shop in El Cajon permanently…I am 65 with a heart condition.” She said she would urge all her friends to shop and dine in La Mesa instead.”

Ann, no last name, voiced shock at what she called a “reckless action” that would hurt businesses, families and children if we must shelter in place again” due to a spike in cases. She asked council not to be “just out for busineses who send campaign money their way.”

Stephen went further, stating that if enforcement were stopped, “the flames of COVID-19 will spread unchecked and the resulting deaths will be on your hands.”

Michele Hagan urged councilmembers to make “decisions based on the latest known science,” an view echoed by several speakers.

Some speakers cited the pandemic’s disparate impacts on communities of color and immigrants, of which there are many in El Cajon. Mohammed Hassan said, “The President and Mayor are in line to kill minorities.”  Mohammed Tuama noted language barriers and asked for a city campaign to urge people to wear masks and do social distancing. 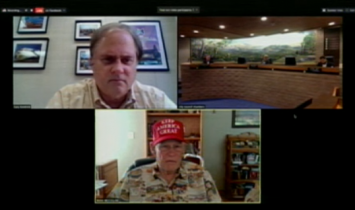 Tyrone Johnson questioned why a councilmember, Bob McClellan, was wearing a MAGA or Trump campaign hat.

A nurse said she wears a mask 10 hours a day even though she has asthma and urged others to do the same.

David Bartheimer said, “ I grieve alongside those small business owners who are hurting, but I grieve even more for the families of over 181,022 Americans who have died” of COVID-19. El Cajon has 11.9% of residents older than age 65, he noted, calling the directive “cruel.”

Chirs McClenney asked if police would respond to reports of large parties or other gatherings.

Several speakers noted elections are coming up for some council seats. Though the mayor is not up for reelection this fall, one speaker called him a “clown” for the proposal and threatened to show up at his future public appearances and play circus music.

Michelle Metschell, who is running for a council seat in district 2, said, “I support Mayr Wells’ decision “ to tell El Cajon Police not to enforce business closures or mask wearing, which she called a “personal decision. Our officers have better things to do than chase after people who are not compliant.”

Julie Griggs asked council to “please stop enforcement.” She said there is “no rhyme or reason why Walmart can be open but malls can’t, or why you can get medical procedures but can’t get a haircut.” She objects to masking of children in schools and also wants churches opened up, which she called essential.

Betty, who did not provide a last name asked the council to “please open up fully” in El Cajon and “remove the mask mandate” which she views as infringing on liberties.  “The threat of the virus is over when survival is 96%,” she said, a comment that ignores the much higher death rate for seniors and people with underlying conditions. “Be brave, make a stand. Let’s open up and leave safety in individual’s hands, not the government’s,” she urged.

Mayor Wells clarified that El Cajon Police to date have given out zero citations. “I’m just trying to give people some hope,” he said. The Mayor indicated that he wears a mask (though not in the council meeting) and is not asking anyone not to do so. But he noted, “Fifty percent of our businesses in El Cajon are closed. The city will lose $7 millon” and more importantly “people are suffering.”

He said he was offended by some comments and called posturing “political” to help block reelection of the president.  He said most who die are elderly and “within one year of dying anyway” adding that shutting down so much is akin to seeing a spider in the house and burning down your house and your neighbor’s.  “It’s time to get past political posturing and do something that makes sense,” he concuded.

Councilman Gary Kendrick said the primary function of local government is to protect the people, but noted that in ride alongs with police, he’s seen that they are stretched thin with many calls.  “I would like the police chief to make the decision on how we prioritize calls and if he sees something that is a danger to the public, then of course he should send someone out.” While violent crimes should be priorities, Kendrick said if someone with COVID-19 was coughing on people and not wearing a mask, police should respond.

Councilman Steve Goble said he felt “uncomfortable with managing city staff” but criticized the state’s shift from seeking to flatten the curve to prevent hospitals from being overwhelmed to now seeking to slow the spread at the expense of “these poor business owners” beset by repeated openings and closings.  Though he things enforcement of COVID-19 rules in generally should be lower priority than responding to violent crimes, he added ”I’m uncomfortable with handcuffing the police, who have used excellent restraint.”

Counclman Bob McClellan said people over 50 or 60 should “probably be very cautious about where  you go” and said people should “take personal responsibility.”  He added that the “police chief should make the decision” on enforcement.

Councilman Phil Ortiz, who is up for election in November, did not comment.

The Mayor amended his original proposal. He made a motion for Council to direct the city manager to continue crafting COVID-19 enforcement as he has been and to keep in mind the city council’s direction that “we want people to be treated gently and with understanding of their situation.”  That amended motion carried, 5-0.