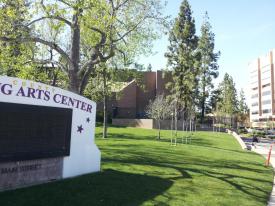 At the suggestion of Mayor Pro Tem Bill Wells, however, Council opted to delay a decision until mid-2014, when a manager for ECPAC is expected to be in place.

The only person to speak from the public  at the meeting was developer John Gibson (photo, right), an El Cajon resident, who supported postponing any name change until the manager is hired.

Ray Lutz from Citizens Oversight, organizer of the SAVE ECPAC group, told ECM, “This might be a good idea to make sure El Cajon continues to be committed to keeping the theater open.”  He indicated that if the city spends funds on the theater, “ perhaps allowing them to have the name makes sense. Unless, of course, if some other organization wants to provide a lot of money, they should get naming rights.” But if the County provides funds, the name should have a regional draw, he added.

Also during  the Council meeting, recreation director, Sara Ramirez, showed a PowerPoint on KaBoom!,  a nonprofit organization that has built over 2300 playgrounds across the U.S. KaBoom! has agreed to build a playground for El Cajon’s Bostonia Park at 1049 Bostonia  Street, which will be for all ages, toddlers to adults. It will include adult exercise stations.

Besides funds from Humana, community partners including Stoney’s Kids and American Legion. The plan came through Councilmember Tony Ambrose first, who was absent at the meeting.

Ramirez added, “We will need 40 skilled volunteers.. The entire park will be made over in six hours.” Prep day will be November 7 from 8 a.m. to 5 p.m., where the playground will be unpacked. On November 9, 8:30a.m.-3:30p.m., they will start building the playground.

Russell Barbour, sales director from Humana, spoke about KaBoom! “We’re very excited to be a part of this project. It’s our goal to help and maintain people’s lifelong well being.. This will be our fourth project in Southern California and our first in the San Diego metro area.”

Councilmember Bob McClellan expressed his appreciation to Humana to help with this project. Mayor Lewis echoed McClellan and told Barbour, “We’re looking forward to it.”

Lewis agreed that now is the time to change it.

Wells wanted to send it to Williford.

McClellan suggested, “Maybe use up the supplies with the old logo first.”

Williford agreed. “It would take a while to change everything.”

Councilmember Gary Kendrick expressed his views. “We really are becoming a new El Cajon.. I think a new logo will reflect [that].”

A motion was made to direct Williford and city attorney Morgan Foley to come up with a proposal and report on how to successfully change the city’s seal/logo and motto.

The vote was 4-0, with Councilmember Ambrose absent.

For more information about the renaming of ECPAC and changing the city’s seal/ logo and motto, view the agenda in full version: http://www.ci.el-cajon.ca.us/content/city_council/10-08-13agenda_full.pdf.  The city’s new seal/logo and motto is agenda item 7.4 with a picture of the Centennial seal/logo and motto below discussion.