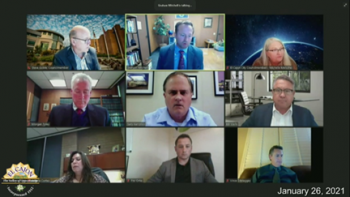 The meeting also included other items impacting the community, including an update on COVID-19, a proposal to outlaw protests at individual homes, and a proposal to limit the city’s investment in alcohol, tobacco, and marijuana.

The proposal to oust Cabrera was made by Mayor Bill Wells and Vice Mayor Gary Kendrick. A staff report cited conflicts of interest by Cabrera  in violation of the city’s ethics policy, since his company has numerous clients seeking city permits. Other reasons included his allegedly demeaning treatment of applicants before the planning commission and questions over his integrity based on conflicting residency statements that he made during a candidate forum hosted by East County Magazine. (See our prior coverage.)

Cabrera did not respond to requests to appear at the meeting via Zoom, but wrote via text to El Cajon City Manager, Graham Mitchell: “Send my prayers to the Council and the city and you. And i wish I could have humbly told them i could attempt to sincerly (sic) correct whatever they deamed (sic) was the issue in order to bring us together for the good of the citizens of the city.”

The Council is exercising its right to reverse the appointment of Cabrera, explained City Attorney Morgan Foley.

“He is a good citizen and an asset to the city of El Cajon,” said John David.

Osama Ghasrawi, a Chaldean immigrant, also wrote on Cabrera’s behalf saying that Cabrera was the first to extend help when Ghasrawi newly arrived from Iraq.

“I have known Mr. Cabrera for years and he goes out of his way to help immigrants and [the] Chaldean community, where I belong,” said Ghasrawi.

The Latino American Political Association claimed that Mr. Cabrera provides insight as a Latino small business owner and advocated for his position on the committee as reflective of the population of El Cajon.

Others were vehemently against Cabrera.

“I personally watched him badger a private citizen trying to do a development that I personally thought would’ve made a fantastic impact on the city,” said Nathan Cornette, “He belittled him almost like he was making fun of him.”

Darrin Mroz, current Planning Commissioner wrote, “I have seen many projects come in, some good, some not-so-good, but with that being said one thing the planning commission has always done is respect all applicants. I wish I could say the same for Humbert; he has been very condescending.”

Ross claimed he had to apologize multiple times to applicants due to Cabrera’s behavior after a 12-year streak of not needing to apologize.

Garmo wrote to the Council, stating, “During the planning commission hearing Mr. Cabrera was quite insulting and demeaning, stating on many occasions that the owners were greedy in asking for the fourth floor.” The dispute was over the properties on 620 and 640 S Marshall Ave, El Cajon.

“The owners had retained a very reputable architect to represent us in the hearing and despite all of the evidence produced showing the need for the additional story… Mr. Cabrera resorted to language that was inappropriate and frankly counterproductive to attracting development,” claimed Garmo, a Senior Attorney at the Garmo & Garmo firm located in the heart of El Cajon.

Stephanie Harper stated, “Mr. Cabrera’s business has profited from his position on the commission which seems like a conflict of interest.” Harper ran against Cabrera in the Nov. 2020 City Council race won by Michelle Metschel.

Harper also claimed that Cabrera lied to the county tax assessor about his residence to obtain a discount as a business owner.

However Melissa Green contended, “This motion is obvious political backlash from Mayor Bill Wells and others… Humbert is born and raised in the City of El Cajon and he truly does reside on Mollison in El Cajon.”

ECM has previously published documents submitted by Cabrera to the city that have two different addresses, both in El Cajon but in separate districts. He claimed in the forum that he and his wife now live with his mother at a residence in the district in which he was running, renting out their earlier home. However, his wife has claimed a homeowner’s tax exemption on the other home, which is only allowed for one’s primary residence, not rental properties.

Councilman Kendrick stated, “He promised that he wouldn’t  represent any more clients that have applications with the city of El Cajon, and he almost tripled the number of clients he has in El Cajon. He broke his promise to us. Some of the Councilmembers may have voted for him because he made that promise. It’s a clear conflict of interest.”

The Council voted 4-1 to oust Cabrera, with Councilmember Steve Goble the only “no” vote. Goble motioned to censure Cabrera instead of ousting him, but there was no second to the motion.

The City is now accepting applications until March3 to fill the vacancy, with interviews scheduled for March 9 via Zoom. The application can be found at: https://www.cityofelcajon.us/your-government/commissions

The recommended action was to make included language changes clarifying that no investment unless otherwise authorized has or would be made in any of these industries.

Steve Goble made a motion to adopt this policy. It was a unanimous agreement by all Council members. 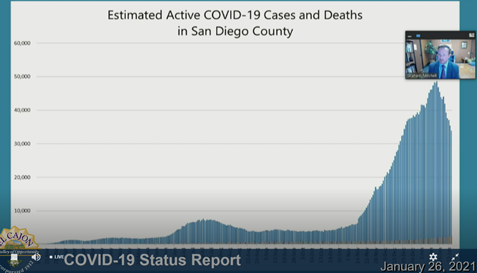 The Council received a COVID-19 status report. Data reflects that San Diego County is on the decline in cases, and that El Cajon data reflects a similar trend. However total new cases are still substantially higher than before the holiday season.

Whether that trajectory may change after a mass worship service outdoors in downtown El Cajon last week remains to be seen. Most participants were unmasked and crowded together. Mayor Wells spoke at the gathering and has openly defied county health ordinances, refusing to enforce rules regulating masking or business closures.

Governor Gavin Newsom recently lifted the stay-at-home order, a decision that is supported by the City of El Cajon which allowed otherwise prohibited businesses to remain open during the statewide shut down. 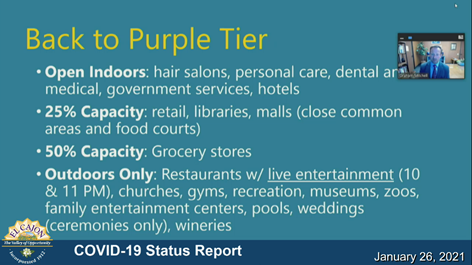 Restaurants are allowed to reopen outdoors and are also now allowed to have entertainment, with added social distancing for performers.

The county has started to distribute vaccines; 1.3 percent of the population of San Diego County has had both doses.

Council requested that staff bring back an ordinance to prohibit demonstrations that target a residence – therefore protesters would not be able to protest in front of a Council member’s home, for example, or for that matter any resident’s home.

The motion was carried by a unanimous vote.

ECM has reached out to the American Civil Liberties Union to inquire about the constitutionality of this proposed action.

Disclaimer:,My opinion on this has no implication of support for or opposition from ECM. This has not been reviewed or authorized by anyone else at ECM; but this is a very very important subject and i wish to comment publicly without any appearance of endorsement or even review (from my journalistic integrity course) from ECM.

Excellent work Ms. Gomez on those quotes both in support and in opposition of Mr. Cabrera. You did this difficult and touchy story full and complete justice, i have been following this for quite some time, and you included EVERYTHING pertinent, and i learned something too, i didnt know how helpful Humbert has been to so many in El Cajon's middle eastern community, however it follows what i know of Mr. Cabrera being kind and not holding negative stereotypes of ANY group or peoples, and his willingness to work with ANYONE (ironically what got him into trouble here)

I have had the absolute pleasure of working/interviewing/getting to know Humbert Cabrera. He is one of the kindest, most knowledgeable and competent in his field, people i have met. I would highly recommend him and his medium sized minority owned architectural company Cabrera and Associates to ANYONE looking for any architectural assistance or consultation.

That is my personal opinion, and so is this: i do not believe this was political retaliation for running for City Council against newly elected Michelle Metchel. There was clearly a BLATANT conflict of interest from Mr. Cabrera. you cant work for people and then vote as a public official on their project. I am SHOCKED he didnt understand this. From what i understand he agreed to this while being considered for his Planning Commission volunteer job.

Even as a novice journalist, i have to consider both conflicts of interest, as well as appearances of conflict of interest, and also disclosure of potential conflicts of interest. I dont think i always get this 100% right, honestly i can think of two instances where i erred, but i am at least aware and consider such things, and where i am unsure, run my questions up the chain of command and/or to an expert.

Sadly, Mr. Cabrera was oblivious to this, which ia a real shame because he was probably (no offense anyone, i havent met any of you), how about LIKELY the most competent knowledgeable person on the commission.

This was not a reflection on his personal or professional competency. It was simply an error (a huge major blaring error which he should have known better or sought guidance from someone who does, for example the El Cajon City Manager) conflict of interest.

As i stated at the top, this is in no way the opinion, neither explicit, nor implied, nor authorized, not even reviewed, by ECM. It is only my personal opinion and experience, nothing more, nothing less.

Regardless of this fiasco, i still encourage people looking for a highly competent medium sized architect's office, to retain, or at least consider and contact for more info, Cabrera and Associates, in (either El Cajon or La Mesa- i've been to the office but it's right on the edge between that hotel at the El Cajon Blvd. westbound on-ramp, and Charcoal House (or whatever it's called now) i think unincorporated territory, but an El Cajon i think or possibly? La Mesa?, mailing address)

B. Wells that is who! I hope bill wells gets covid 19 and does not recover because of his stand on not following the rules. I know people who have died and others who are never going to be the same because this covid 19 IS REAL!