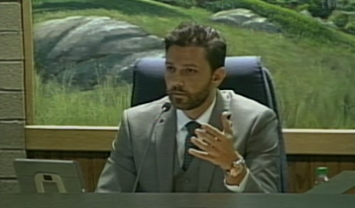 October 18, 2018 (El Cajon)--Troubled El Cajon Councilman Ben Kalasho launched into a screed at the conclusion of last Tuesday’s City Council meeting, attacking the local news media during the activities portion of the session. He did not directly name a particular journalist or publication.

He opened by thanking the public for coming to express concerns about the city and have their voices heard, noting that the 3 p.m. meetings are a time when many are working or picking up kids from school.

“It does really say a lot to see so many people come in and speak about genuine issues and concerns – whether if they’re homeless or wanting to bring in more police. I thank you for doing that. This is part of our democracy that we hold dear,” he said. “Your freedom of speech to making these statements – whether they are pro or against. Whether you’re for someone or not it doesn’t even matter. It doesn’t matter the political party. I would even say that we have forgotten how to argue without hating each other. That’s something I think we need to bring back.”

Then he criticized the media, stating, “It’s like we’re in a two-fold political realm – while you have reporters around us where every news article, in my opinion, is a red herring and it’s all tabloid stuff. You really ought to be careful about what you read and who you interview with. I can’t tell you who to interview with, what reporters are going to approach you after this. Besides the person with the camera to my right, I would avoid any reporter in here. Thank you.”

A Kalasho supporter’s sign falsely claimed East County Magazine is “in bed” with Councilman Gary Kendrick, Kalasho’s political opponent. Another cited a campaign finance report listing a $120 payment to ECM.  In fact, that payment was to purchase two tickets to ECM’s 10-year-anniversary, East County Fest. Hundreds of people purchased tickets for the dinner, including  all of the other politicians from all four East County cities who attended--except the Kalashos, who crashed the party without paying but left when approached by security.

Most recently, he settled a federal lawsuit brought against him by San Diego activist, Mark Lane, after Lane complained that Kalasho had blocked him from commenting on his Facebook page. A federal judge in late May, in a lawsuit against President Donald Trump, ordered that constituents’ social media posts cannot be deleted by any public elected officials.

Councilman Kendrick responded to Kalasho’s attacks on the media in e-mailed a statement to ECM which reads, “Freedom of speech is one of the most sacred and foundational rights in the United States. No politician should use his office to silence the people or to try to abridge this right.”

Kendrick’s son, Jesse, has filed a police report alleging that Kalasho stalked and harassed him on the campaign trail. A process server recently also called police to report that Kalasho threatened to attack him with a dog while he tried to serve legal papers on Kalasho’s wife, Jessica. View call records from El Cajon Police for these incidents.

(Disclosure: this journalist also filed a police report after experiencing a threat by Kalasho with his dog, which he described as an “attack dog” on Facebook, in late June at Parkway Plaza. The incident remains under investigation.)

In various social media posts, Kalasho has branded his campaign as one against “fascists and Marxists,” espousing a populist “America First” theme.

His published campaign statement filed with the City of El Cajon several months ago and appearing in El Cajon Dist. 1 election ballots, says, in part, “I know that most Fletcher Hills & Grossmont area residents shop in Santee or La Mesa. Why? Because it's safer, cleaner & still feels like you're in America. If re-elected, I promise to hire three new Police Patrols for Fletcher Hills & Grossmont areas. Ensuring safety and security while protecting your horne values. I don't care about party politics, it's a waste of time. I am looking to the future. I am American first. Are you?”

He has also made accusations that Kendrick and his son have engaged in defacing his campaign signs in and around Fletcher Hills. Kendrick has denied tampering with signs.

As reported by ECM, Kalasho has made similar accusations about his campaign signs being defaced in his previous campaigns for public office. 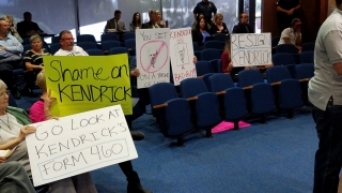 Earlier in the meeting, Kalasho organized a small group of audience members to carry protest placards in his defense and to speak to his defense. The number was far smaller than the crowds that came to previous Council meetings demanding Kalasho’s resignation.

Fletcher Hills resident Carol Sheehan (photo, right), who said that she has lived in El Cajon for 29 years, spoke in Kalasho’s defense. She claimed that the City Council has held a negative bias against Kalasho over time. “Ben has been slandered. He has been lied about. He has been given no support by Councilmen. I think Ben has good ideas and is a man of action. He’s the only Councilmember that I have called who has responded immediately. You call him about some graffiti on a wall and the next day it is gone,” she said.

Another individual during the public comment portion, Eric Durden, became engaged in a verbal tussle with El Cajon City Attorney Morgan Foley and El Cajon Mayor Bill Wells when asked not to discuss issues relating to the ongoing re-election campaign for the Dist. 1 City Council seat.

“I’m part of the younger generation and we are surrounded by all this negativity going on. I live in Fletcher Hills. When I drive around El Cajon all I see are signed which have been graffitied. When I get home from work I see slanderous material that has people in devil horns and the like. We’re supposed to bring positivity in the world,” he said. He continued to accuse of City Councilmen Kendrick of conducting a negative campaign.

Foley interrupted Durden and suggested that Kendrick speak to the individual after the Council session. Mayor Wells then interjected that the public comment portion of the meeting was not for engaging in an election debate. “It’s not the right time for that,” he said.

Durden then said, “It’s not a debate. When is the right time?”, to which Wells said, “You could make an appointment with Councilman Kendrick and meet with him.”

Then Foley said, “Mr. Durden, you want answers based on a campaign. You want answers from both candidates, then you should be asking the questions outside of this Council chamber. This is not an appropriate forum.” Durden then took on Mayor Wells, who supported Foley’s position.

Durden then accused Wells of defending Kendrick’s campaign. “You’re just campaigning for your buddy Kendrick,” to which Foley suggested that Wells end the commenting.

Recent El Cajon citizen Andrew Raclin followed Durden with similar accusations against Kendrick, noting how Kendrick’s son had been allegedly engaged in intimidating activity against Kalasho and littering while campaigning in Fletcher Hills. (A California Public Records Act request to the El Cajon City Police reveals the opposite, with call logs documenting numerous calls from Councilman Gary Kendrick's son, Jesse Kendrick, reporting Kalasho following him with a vehicle and attempting to intimidate him while campaigning for his father in Fletcher Hills.)

Reading from a prepared script, Raclin said, “I guess there were some pictures depicting Mr. Kalasho as a devil worshipper when he is wearing a masquerade mask for a ball event trying to generate charity funds for homeless and seniors. It seems like a pretty good thing to do. I guess devil worshipping is not so bad if you are raising money for the elderly and vets, if you are such.” After becoming visibly flustered as he rustled through several pages, Racslin ended his comments. 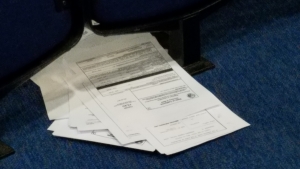 During the Council’s closed session, Kalasho’s wife, Jessica, was served with court papers ordering her to appear on Nov. 2 before San Diego Superior Court Judge Kenneth J. Medel for a Judgement Debtor’s Examination related to her position as President/CEO of the Kalasho’s Chamber of Commerce and beauty pageant.

Jessica Kalasho said, “Don’t touch me,” and threw the papers on the floor. City Clerk Angela Aguirre picked them up. Later, City Attorney Morgan Foley instructed Aguirre to give the papers to Councilman Kalasho, who accepted them.

Although Judge Timothy Taylor issued a bench warrant for Jessica Kalasho when she did not appear as commanded for a Aug. 31st personal judgement debtor examination, a paperwork snafu involving the San Diego Sheriff’s Office delayed local law enforcement from following through on arresting Jessica Kalasho for contempt of court. The bench warrant was issued before Taylor recused himself from the ongoing fraud litigation against Kalasho and his wife, in which allegations include sexual harassment of contestants in a beauty pageant that they run, defamation of character and other charges..

In other El Cajon City Council business, councilman Steve Goble made an announcement during his activities report that he had reported to the San Diego County Board of Supervisors on the success of the city’s homeless outreach program.

In an unanimous vote, the council voted to continue to funding the city’s homeless services, outreach program, and housing navigator program in conjunction with Crisis House, a locally-based public service organization.

Is Fletcher Hills so much better than the valley of El Cajon itself? I think there's something wrong with his eyesight. If this is his way of skewed thinking, then he definitely should NOT be our city councilman, or any representative of this city.
Bessmon Kalasho can pay, swindle or lie to all the people he can muster to get them to attack Gary Kendrick on his behalf, but nothing he/they can say even begins to discredit the truth regarding his own unethical behavior and outright lawlessness. And as a result, Kalasho will remain and will be remembered as the worst council member in El Cajon history, because that is what he has proven himself to be.