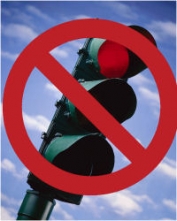 March 1, 2013 (El Cajon) – El Cajon’s Council 4-1 this week to cover and shut  off red light cameras for six months, though cameras will remain installed.  Safety data will be evaluated in six months and if accidents have not risen sharply, Council made clear its intent to permanently remove the red light cameras.

Pro Tem Mayor Bill Wells addressed issues that red light cameras have brought to El Cajon.  While some contend the surveillance devices improve safety, the results are inconclusive.  But the cameras also pose problems of “civil liberties,” Wells noted.  “I am asking us to engage in a debate to end the contract [with Redflex].”

Councilmember Bob McClellan agreed. “It’s a lack of compliance. We were having an accident problem at intersections,” he said, noting that cameras were installed because people weren’t compliant with the law.  But he added, “I think the cost of the ticket is extremely high...$500 a ticket is a little obnoxious.”

Councilmember Gary Kendrick offered more reasons to get rid of the red light cameras, “I’ve talked to a lot of people since the last meeting. People have told me they’ve been traumatized from getting tickets. It creates resentment toward El Cajon and the judicial system.”

Councilmember Tony Ambrose spoke up. “I think it’s time for it to be ended. There’s such a loathing from people I’ve talked to.”

Police Chief Jim Redman was called forward by Mayor Mark Lewis.  He gave data for accidents at seven intersections. “There were 10,500 violations just in 2011. In a study, the collisions went down 31% [at five intersections], and went up 32% and 21% respectively [at the other two].”

Kendrick said, “We represent the citizens of El Cajon. The amount of money taken out of the economy is incredible. I’m pretty sure this is the right way to go.”

Lewis argued, “It’s not worth it to me. If we go forward with [ceasing operation of the cameras], can we keep the cameras there?”

Chief Redman answered, “Yes, the company will maintain the cameras at the intersection for one year.”

Bob Warner from the Redflex company was the next to speak. “We did have a very successful program by reducing crashes in the community. We have to maintain the consistent enforcement; that’s what the program is. Accidents have been reduced up to 31% in a 10 year period.  I’m very proud of what we’re doing.”

Wells wanted to know, “I’ve heard in Arizona, cameras look at people’s speeds on the freeways. Do you do that?” He also asked Warner how many cameras he would be comfortable with.

Warner responded, “No. There are mobile red truck products, monitoring radar. It’s up to the judicial government itself.”

Wells said, “We are on camera all the time. The evidence I’m seeing is accidents have been a wash.”

Next up to speak was Trev Holman, former city employee in the public works department. “I’ve worked with the city for a number of years. I was here in 1996 when the cameras were implemented. We only pick a specific number of locations to go with,” he said, citing Broadway/Mollison and Washington as examples. “Cameras aren’t being charged anymore. There’s a 12 second video that the police can review. Based on the video, they can see if they actually ran a red light. In addition, there’s a built-in margin where people can go across a limit line once the light turns red.”

Holman added, “A reason we implemented the program is that the police can’t just sit there and monitor the cars. The real issue is they’re a very effective way of making sure people aren’t doing what they shouldn’t be doing. I think we should use technology that’s beneficial to the public. I would agree $500 is very high. There’s no doubt in my mind that the cameras work.”

Wells asked Holman, “I’m curious. Do you like the idea of cameras on the freeways?”

Warner explained how even the cities of San Diego and Los Angeles recently took their cameras down, after finding that safety had not significantly improved.

Holman stated, “The City of El Cajon has challenged us as to why we implemented the program. The city attorney here [Morgan Foley] has defended us. We run a very straight program.”

Lewis suggested to Wells that cameras not be removed, but instead that cameras cover up the signs and cameras to see if there would be more accidents in a period of time. If there were, they would keep the cameras and uncover the signs. Wells agreed. So, Warner let the Council know the contract expires in June 2014, and if members wanted to do an experiment where they could cover up the cameras and remove the signs, there would be no charge.

Wells then made a motion for the cameras to just be covered and that invoices from Redflex would cease from that time on. In six months, a re-evaluation will be done.

The motion passed 4-1 with Mayor Lewis casting the only vote against it.