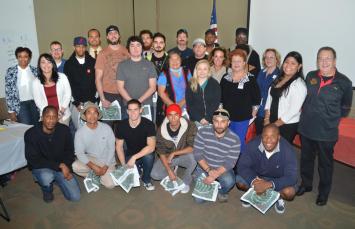 November 5, 2015 (El Cajon)--About 30 military veterans, now students at Cuyamaca College, enjoyed a barbecue and received school supplies at a Veterans Week commemoration hosted on campus Wednesday by the El Cajon Elks Lodge. The event, which also included a raffle for prizes including T-shirts, gift certificates from merchants and a pair of tickets to a Chargers’ football game, marked the second year that Elks Lodge 1812 joined the college in honoring student veterans.

Cuyamaca College President Julianna Barnes said the event is a reminder of the college’s commitment to the academic success of its more than 700 student veterans.

“We are thankful for your service and this is but one way to show you how important it is to us to put into action our commitment to you,” she said. Barnes noted that the college also provides student services for veterans and a Veterans Resource Center, which provides a central entry point for veterans as they transition from the military into the college community. Barnes, who previously served as vice president for student services at Cuyamaca, was instrumental in establishing the college’s veterans resource center.

Scott Thayer, vice president of student services said student veterans can be assured that meeting their educational needs will continue to be a high priority at the college. For the second year in a row, Cuyamaca College was ranked among the nation’s “best of the best” veteran-friendly schools by U.S. Veterans Magazine.

“When you come through these doors, staff and faculty will provide the support to help you reach your goals,” Thayer said.

Among those serving the food Wednesday was Cuyamaca College Professor Emeritus Anthony Zambelli, a longtime member of the Elks and 2014 president of the El Cajon lodge. Veterans and children are among the major beneficiaries of the Elks’ largesse, Zambelli said.

The barbecue and school supplies the veterans received Wednesday were funded by a $2,000 grant from the Elks National Foundation.  The El Cajon lodge has a million-dollar trust to fund vocational scholarships and he encouraged the veterans to apply.

“Take advantage of the money because we want to honor you,” Zambelli said. “All lodges really believe in veterans.”

With nearly 1,500 veterans enrolled at Cuyamaca and Grossmont colleges, veteran services are prominent at both campuses. The colleges have Veteran Affairs or Veteran Services offices serving as a liaison between college and the U.S. Department of Veteran Affairs for, among other things, certification for VA educational benefits. Resource centers offer a collaborative delivery of student services such as those tailored for students with disabilities and those needing counseling or access to assistive technologies. The colleges also have a longstanding practice of giving military personnel and veterans top priority in registering for classes.

For more information about veterans services, go to www.cuyamaca.edu or www.grossmont.edu.