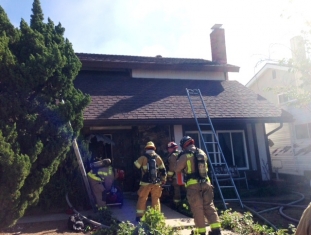 November 13, 2015 (El Cajon) –Heartland Fire & Rescue crews in El Cajon responded to reports of a structure fire this morning at 9:45 a.m. Upon arrival, firefighters found heavy smoke coming from the second floor of a single-family home at 1715 Eldon Court in El Cajon.

Three people have been displaced by the fire and the American Red Cross will be assisting them with temporary shelter. One of the three occupants sustained minor burn injuries to their hands. Two dogs were rescued from the fire and one cat was found deceased.

The cause of the fire is under investigation.