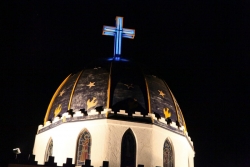 February 12, 2010 (El Cajon) –Iraqi immigrants began lining up at 5 a.m. today to recertify documentation and quality for social service benefits at the Chaldean-Middle Eastern Services Office at 343 Main Street in El Cajon. But shortly after 9 a.m., Heartland Fire & Rescue crews responded to a medical aid call. They found a crowd estimated at 500 to 1,000 people congregating in and around the second floor office.

Firefighters summoned the Fire Marshall, as well as El Cajon Police to conduct traffic control near the corner of East Main Street and Avocado.  Fire Marshal Dan Pavao found all entrances, including stairwells, jammed with people, making it a very unsafe condition in case of an emergency, a City press release states. He made the decision to close the event down after unsuccessful attempts to organize the group. The owner of the building agreed, and the event will be rescheduled.

Reportedly, there was a notice that Iraqi immigrants could come to have their documentation recertified to qualify for social service benefits. People began lining up at 5 a.m. outside the office, which opened at 8 a.m.

The crowd dispersed in a calm and orderly fashion. There were no arrests. On the initial call, one person was transported to a local hospital with minor injuries.

San Diego’s East County is home to approximately 35,000 to 50,000 Iraqi Chaldean Christians, including many Iraq War refugees, as well as a growing number of non-Chaldean immigrants. Since October 2008, East County has been receiving 300 to 400 refugee families each month.

Many Iraqi immigrants have successfully assimilated into our community, owning markets, stores and restaurants among other occupations. But with the growing numbers of war refugees amid a weakened local economy, newcomers have faced challenges finding employment.

Late last year, the federal government cut aid for refugee families (though not individuals) from eight months to just one month. Reportedly the reason was to free up federal resources to help individual refugees, who could not easily qualify for other help. The move has increased requests for aid from the state among local refugee families. Local Chaldean churches provide extensive help for newly arrived immigrants, but both private and government resources have been stretched to capacity by current conditions, numerous social service workers and educators have advised ECM.

It is unclear which specific benefits the immigrants in line were waiting to obtain or when the event will be rescheduled. ECM has requested this information from CMES and will report the result once received.