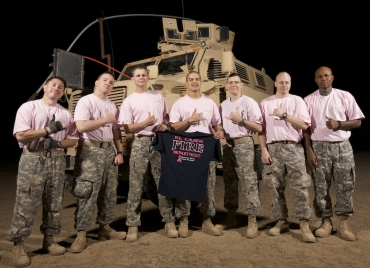 December 28, 2009 (El Cajon) -- A few months ago, El Cajon Fire Captain Dave Rickards sent a group of Army Rangers based in Iraq the department’s Breast Cancer Awareness shirts. Through a mutual friend, Captain Rickards was able to send this care package of shirts along with some other items in a gesture to show support for our troops fighting in the Middle East.

According to Captain Rickards, “Members of the El Cajon Fire Department are proud to wear their department logos with the pink lettering, showing their support in the fight against breast cancer. Sharing that pride with our troops is an honor.”

According to the troops pictured, they were really excited to get the T-shirts. The package contained the navy blue fire department t-shirts with pink lettering, and additional pink t-shirts. When they received the package some of the guys were a little uncomfortable wearing pink t-shirts but they finally warmed up to the idea and took the picture. The men featured in the attached photograph are all medics currently stationed in Iraq for a 15-month tour; attached to the 3rd Infantry.