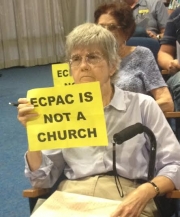 During public comment, Bonnie Price, a resident of El Cajon, shared her views first. “I was part of a group that delivered a letter last week,” she said, referring to a lengthy letter that put forth a legal argument contending that the lease would violate the U.S. constitutional requirement for separation of church and state. She requested that this issue be put on the next agenda for September 23.

Frank Tsimboukakis, president of the East County Democratic Club and candidate for State Senate District 38, spoke next. He was also opposed to the partnership. One argument was that the Rock Church has been involved in two lawsuits, one of which has been resolved. Another reason was because of the high unemployment and high poverty levels in this city. “You’ve been running this city like a dump… I really encourage you to reconsider this.”

Eric Lund, general manager of the San Diego East County Chamber of Commerce, spoke in support of continued negotiations with Rock Church.  He said the partnership would be “a real benefit to all our businesses,” adding, “The city will still operate the performing arts center.” Without the negotiation, he said, it would be “highly unlikely” that the city could afford the costs of opening and running the theater.

Richard Graydon, a resident, said, “We have lost businesses… They have gone to Santee…Businesses will go broke… We will be in debt.”

Ray Lutz of Citizens Oversight Committee told Council and staff, “We sent a letter.. to be put in written communications for the next meeting… You’re giving [the Rock Church] a $900 deal per theater day.. Rates given to the Rock Church should be the highest rate given to anybody.”

But Tony Sottile of the Planning Commission stated, “What I’ve heard so far is much religious discrimination."  He added that to refuse to rent to Rock Church on the basis that it is a religious organization would be discrimination. "May your decision be a wise decision,” he told the Council.

During that time, a few people in the audience were holding signs that read “ECPAC is not a church.”

Later on, Council also voted to adopt the application and investigation fees for special operation licenses and renewal fees for pawnbroker and second hand dealer licenses, and an adjustment to the miscellaneous fee schedule. 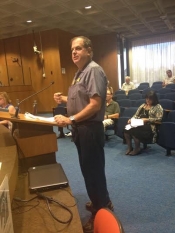 Thomas De Russeau from El Cajon was opposed to the fee changes. “Our fees are more expensive… To double it, that isn’t very fair.”

John Timoney, who has a special operation license, said, “I pay a fee for the DOJ (Department of Justice)… If it’s going to be that amount, I’ll do it myself.”

After a motion was made, Council voted 3-0 to approve all fees and an adjustment to the miscellaneous fee schedule. Councilmember Tony Ambrose was absent and Mayor Bill Wells recused himself from the vote due to a conflict of interest.

For more information about the fees, visit: http://www.ci.el-cajon.ca.us/dept/finance_licenses.html or call the finance department at (619) 441-1721.