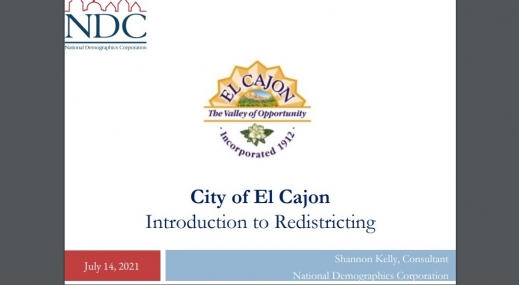 Local governments redistrict every 10 years to reflect a change in local population. The redistricting plan will affect how residents elect their council members.

The City of El Cajon, through Measure S, voted to move from an at large to district election system in 2016. But those district maps were drawn in 2017 using 2010 population counts. 2018 was the first election where City Council members were elected by district

Now, a new map is needed, since updated population figures from the 2020 census soon to become available may show that current districts are out of balance and the new California Fair Maps Act created new criteria that must be considered

Even prior to the meeting, Doris Bittar, president of the San Diego Chapter of the Arab American Anti-Discrimination Committee (ADC), prepared a comment addressing concerns from Arab, Chaldean, Kurdish and other minority communities in the El Cajon area.

El Cajon has a foreign-born population of 30 percent including about 15,000 to 20,000 Chaldeans as well as additional population of Arab refugees from Iraq, Syria and other nations.

There is an anticipated, estimated greater population of about 60,000 Chaldeans spread across East County in other neighboring cities and unincorporated areas.

The ADC requested an extension on the commitment time period to improve inclusivity and also asked for the option for concerned residents to call-in or to participate remotely.

On Monday, the Majdal Center, an Arab community center in El Cajon, hosted an online workshop on preparing testimonials to brace Arab Americans to speak out at the meeting.

Kelly provided information on Census data, the definition of neighborhoods," "communities of interest" and referenced the current district map of El Cajon.

Requests for more translators were made by a total of 15 individuals from the Arab, Middle East and North African (MENA) communities.

Najah S. Abdelkader, also of the San Diego ADC, pointed out that Census data doesn’t represent the Arab and MENA communities. She stated that these groups are not properly accounted for and asked for more opportunities to attend redistricting meetings.

El Cajon resident Keith Holmes also expressed concerns and asked that the city free itself from state regulations in order to streamline the redistricting process.

The Partnership for the Advancement of New Americans (PANA) has a redistricting survey for African, Middle Eastern, Muslim and South Asian (AMENASA) Americans to fill out in order to ensure that the community stays in the same district.

More information from the City of El Cajon on its redistricting process can be found here.

The next redistricting meeting is scheduled for Wednesday Sept 8 at 6:30 p.m. Renette Recreation Center, 935 South Emerald Ave., El Cajon. The Sept. 8 public hearing  will allow public input prior to the release of draft maps, identifying neighborhoods and communities of interest.

Another meeting is set for Nov. 4 at 7 p.m. in Kennedy Recreation Center, 1675 East Madison Ave., to discuss and revise draft maps.

A preferred map will be identified and adopted at a final meeting on Saturday, January 22, 2022 at 10:30 a.m. at El Cajon Valley High School, 1035 East Madison Avenue, El Cajon.

Language interpretations and requests for disability-related modifications or accommodation, including auxiliary aids or devices, may be arranged by emailing a request to redistricting@elcajon.gov at least 72 hours prior to the meeting.