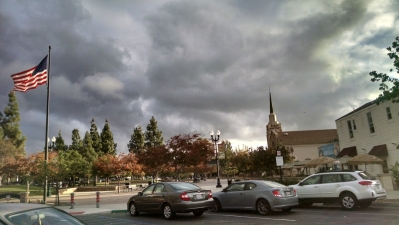 October 15, 2020 (El Cajon) -- Representatives from the Community Development Department from the City of El Cajon hosted a virtual community meeting on Sept. 29 to both share and gather information regarding the city’s long-term General Plan.

Mr. Hayes stated that “the primary intent of the event is to gather information from the community. We are asking for input to help identify issues and priorities for the next General Plan."  The current General Plan is decades old and needs to be updated.

The General Plan is a long-range, 20-30 year plan, that will help city officials know how the city should grow and develop. Input from the community is being gathered through the rest of 2020 and a final report will be presented to the Planning Commission and City Council in Spring 2021.

Mr. Spencer Hayes explained, “This is a General Plan Amendment to the El Cajon General Plan. Specifically, this will update the Housing Element, Environmental Justice Element (new), and Safety Element. Each Element is essentially a chapter in the Plan.” The presenters urged community members to “definitely take the Housing Element and Environmental Justice Survey, available on the City's website." 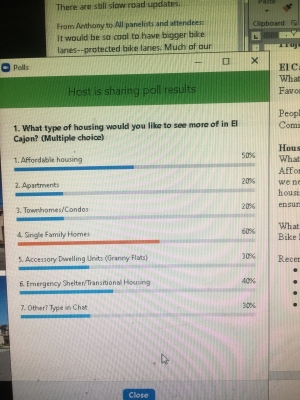 Environmental Justice is new and was added because it is required by the State as a result of SB1000, passed in 2016.

Topics that were presented and discussed this evening included an overview of the city of El Cajon, housing issues, community places, walking/biking/driving/transit, healthy foods, community engagement, and disaster preparedness.

After the meeting was finished, the presenters asked the participants if there were any other items, issues of comments they would like to share that were not discussed. One community member, speaking Arabic, said there is a significant drug problem in, and around, the apartments and neighborhood where she and the Chaldeans live in El Cajon.  She said that the community members have shared their concerns with property management but nothing has been done.

Another participant commented that during power outages, the city should have contingency plans for the residents for when the power is out.

Participants were asked a series of questions, such as what they like about El Cajon.  Answers ranged from live music downtown (before the pandemic) to the library, arts, restaurants, and the duckpond outside the courthouse. 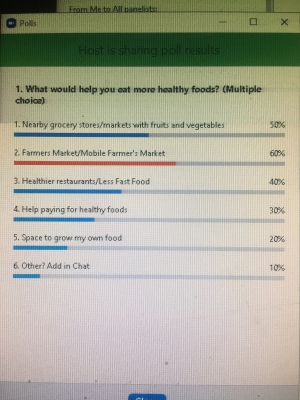 Concerns include homeless in area parks.

Most present said they rely on driving as their main form of transportation, but would like to have options to walk or ride a bicycle.

As for city communications on important events, some want the city to do more social media outreach and work harder to share information.

Other concerns raised included a need for translation of emergency plans for non-English speakers and complaints of landlords not responding to concerns.

Details of the city’s General Plan and its development, as well as recording of this evening’s meeting, can be found at www.cityofelcajon.us/Plan.

This is still early in the process of updating the general plan.  The planning team can be contacted at planning@cityofelcajon.us or 619.441.1742.