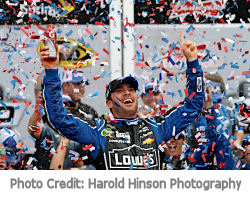 In Celebration of the City’s Centennial Year, November 2012 through November 2013, look for Jimmie Johnson Banners to be up around the City very soon. Key places the banners will be placed include the homes the Jimmie Johnson Foundation and Habitat for Humanity built on Foundation Lane, on Second Street where the car culture of the community was enjoyed, and near Jimmie’s favorite Mexican restaurant at Greenfield Drive and East Main Street close to where Jimmie grew up in East El Cajon.

Johnson was born on September 17, 1975, in El Cajon. He attended Granite Hills High School where his number 48 has been retired from all sports. In 2010, Johnson became the first driver in NASCAR history to win five consecutive Sprint Cup championships. Between 2002 and 2012, Johnson recorded 60 career Sprint Cup wins, which ranks 8th on the all-time wins list. In 2009, Johnson became the first race car driver to be honored as Male Athlete of the Year (U.S.) by the Associated Press. He has been named Driver of the Year four times, most recently in 2010.

If you attended l Cajon’s Centennial Celebration on November 12, 2012, and took a photo with Jimmie’s #48 Show Car, check out his JJ & Me Photo Contest on Twitter. Submit a photo you have with Jimmie or his #48 Show Car to his contest and you could be selected as Jimmie’s fan of the week.

Visit the City’s Centennial website, www.elcajon100.com, to learn more about Jimmie, to see his banner, and to view his video message to El Cajon! Visit www.jimmiejohnson.com for more information about Jimmie Johnson and his foundation.

“Congratulations Jimmie Johnson!” a press release issued by the City states. “Thank You for being a role model for our community’s youth and helping to continue El Cajon’s legacy as The Valley of Opportunity… yesterday, today and always!”