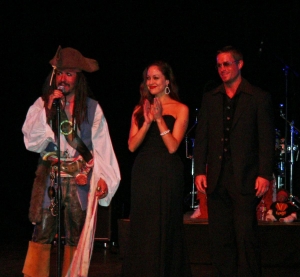 Photo by Miriam Raftery: Performers on stage at ECPAC in brighter days

April 10, 2015 (El Cajon)--It has been said that “the opera ain’t over until the fat lady sings.” If all goes as planned, the fat lady could be soon be setting a date to sing on the stage at the shuttered and embattled East County Performing Art Center (ECPAC) sooner than later.

In a move that pleased local community activists who have decried the prolonged shutdown of downtown El Cajon’s entertainment venue, the City of El Cajon released an extensive request for bids to fix the theater’s leaky roof and bring about extensive technical upgrades throughout the facility.

According to Mayor Pro Tem Gary Kendrick, the estimated $2.9 million dollars to bring about the improvements will come from the recent sale of the city’s former police headquarters on Fletcher Parkway across from Parkway Plaza. Besides repair of the theater’s roof, the list of items specified in the released request for bids include a retrofit of the theater’s concessions area, a new foyer elevator to be installed for public use, a revamping of stage scenery rigging,  as well as installation of a new lighting and sound system. The theater will be also be brought up to code to comply with current Americans with Disabilities Act (ADA) standards.

“We are very fortunate to be able to draw on the proceeds of the sale of this building to make the renovations that need to be made,” Kendrick said. He declined to speculate when the renovations will start and when the theater will be once again open its curtains to audiences. The deadline for bids is Thursday, May 7th.

ECPAC has never quite been able to gain traction as a successful performance venue since its groundbreaking in 1973 as a joint project by the City of El Cajon and the Grossmont-Cuyamaca College District. The 1,142-seat theater, which opened its doors in March 1977, has always received recognition and accolades for its sightlines and its excellent acoustics. But it has been mired in a never-ending management volleyball game between the City and the community college district, plus different management groups including El Cajon’s Christian Community Theater and a citizen-run cooperative, Arts Center Foundation, Inc.

Drowning in red ink despite bringing major name performances to the theater, the Arts Center Foundation, Inc.,’s lease was terminated after it missed a loan payment to the City of El Cajon in November 2004.  Christian Community Theater once again took up management of the theater through its subsidiary,  ArtBeat Management for four years, but in October 2009, the El Cajon City Council voted unanimously to terminate that agreement when ArtBeat Management demanded City subsidies after it said that it could run the theater on its own. The City planned to reopen ECPAC on its own in 2011, but safety issues thwarted the plan.

Seeing the possibility of an alternate use for the property on which it stands, the City of El Cajon soon thereafter entered into an exclusive agreement with local developer E. Neal Arthur to develop plans to tear down the theater and build a Marriott Courtyard hotel in its place. After a loud community outcry, the City Council scuttled those plans and supported a proposal to build the hotel near the theater at which time the Council determined it could fund necessary renovations with the sale of the former police headquarters.

According to Kendrick, after the theater renovations have been completed, the next challenge will be to engage a viable source of regular operating revenues.

“We need a stable source of revenues so we can weather the next economic downturn,” he said.

One possibility which has been under serious consideration for nearly a year is  a lease to allow The Rock Church, a charismatic fundamentalist religious megac-hurch with locations through San Diego County, to become a regular tenant of the performing arts center.  Supporters say such an arrangement could draw some 12,000 people a week or over half-a-million people to downtown El Cajon a year.  The Rock Church would occupy the theater exclusively on Sundays and also 25 percent of Fridays and Saturdays in the course of a year for church purposes. El Cajon’s City Manager, Doug Williford, says that 75 percent of all Friday and Saturday nights, as well as most mid-week nights during the year will be free for ECPAC to be used as a regular performing arts and event center, fully apart from the Rock Church’s private use of the facility as a church.

But that plan has drawn the ire of a local citizen’s activist group led by Ray Lutz, who claims such a deal is unconstitutional.  Lutz’s group contends The Rock Church is receiving preferential treatment on rental rates and that it is actively seeking to manage the facility. Lutz, head of Citizens Oversight Projects and Save ECPAC,  is threatening legal action against the city should an agreement be inked with The Rock Church.

Although he declined to cite any specifics of its current ongoing lease negotiations with The Rock Church, Kendrick stated, “Our attorneys are telling us everything is legal.”

As a part of a deal, The Rock Church would build a new, 20,000-square-foot Sunday-school headquarters and multi-purpose event space on the lot adjacent to the theater between ECPAC and Main Street which also could be utilized by the city and by the theater. It would lease that land from the City for $4,000 a month for 35 years, after which time the building would be turned over to the city.

Kendrick strongly denied claims by the citizen's group that The Rock Church would be assuming management of the theater in any way.

“We may or may not come to an agreement, but there is no discussion at all about them taking on a role managing ECPAC now or in the future. A move like that would require the city to issue a separate request for bids. And that’s not in the cards,” he said.