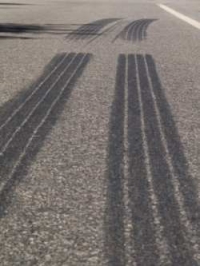 August 26, 2015 (San Diego’s East County) – A driver with a suspended license for a felony hit and run swerved into the path of another vehicle, causing serious injury to two people.

The collision occurred this morning at 3:40 a.m. on Dehesa Road in unincorporated El Cajon, west of Sloane Canyon. Bashman Azatt Abdulahad, 20, of El Cajon was driving a Nissan Altima eastbound when he served into the path of a Honda Civic heading westbound.

“The driver of the Honda had no time to react as the vehicles collided head-on,” said Officer Kevin Pearlstein with the California Highway Patrol. “Immediately after the collision, Abdulahad took off on foot but was located by an Officer from the Sycuan Police Department.”

The Honda’s driver, a 43-year-old Lakeside man, was transported by ambulance to a hospital with non-life-threatening injuries. His passenger, a 22-year-old man, was air-lifted with major injuries.

Abdulahad was booked into San Diego County Jail for driving with a suspended driver’s license, and felony hit and run. Alcohol and or drugs were not factors, Officer Pearlstein said.