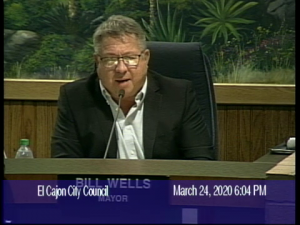 The hour-long webcast addressed such subjects as the city’s response to the COVID-19 pandemic, how the city is addressing the needs of the area’s homeless population during the crisis, the city’s refusal to shutter local gun shops, resident evictions and foreclosures, law enforcement response, and other topics. 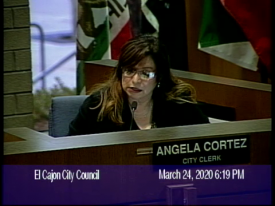 The webcast originated from the El Cajon City Council Chamber without an audience, though viewers could watch from home. City Manager Graham Mitchell, Recreation Director Frank Carson, and City Clerk Angela Cortez (photo, right) also participated in the town hall. Assistant City Manager Vince DiMaggio was mentioned as being the audience as an observer.

“It’s been a wild couple of weeks. In my entire life I’ve never experienced anything like this,” said Wells. “When we’re talking about the staff and how all you are doing out there…one of the things that we’re very clear about it’s very obvious to us is that we’re not used to being so disconnected from you. We’re used to seeing you in the lobby, seeing you coming into the building, talking to you on the phone, seeing you at the council meetings, seeing you at various events at the rec centers.”

He continued, “Because you are all being all good citizens you are all doing the right thing being in your houses…we’re not seeing much of you.”

He reassured viewers that although city offices are closed, “The wheels of government continue to roll on and we are still here to protect you and the city. We are still here to be your servants and we want to make sure that you have a chance to ask questions. I know you have a lot of questions. We might not have all of the answers. I do promise you that I will tell the truth and I’ll give you as much information as I have. If there is something I don’t know, I’ll try to get back to you.”

In the space of an hour, the questions were read by City Clerk Cortez as they were submitted during the webcast.

Several questions were related to statistics of those affected by the COVID-19 virus publicized by the State of California and other government entities, to which Wells responded that the City of El Cajon receives the same information from the state as what is communicated to the public.

In response to another question on closing of non-essential small businesses as ordered in the “shelter in place” order by Gov. Gavin Newsom, Wells asked, “What does it mean for a non-essential business to close?” He said that while there were some guidelines given by the state and federal government, most of them are “fluid” and open to interpretation.

For instance, Governor Newsom’s executive order lists many essential businesses including cannabis dispensaries in cities where they are legal, but left decisions on gun shops up to each city or county.

Wells said of ideological differences, “We have decided not to get into that. What we’re really trying to do is to make sure we follow the guidelines for social distancing. Our main concern that there are not a lot of people gathering in any place, whether it be a business or church or school or even in a City Council Chamber.”

Prior to Tuesday’s Town Hall webcast, Wells engaged County Supervisor Nathan Fletcher in a public spat after Fletcher said that gun stores are not considered essential and should close. Fletcher stated, “We consulted with our county counsel. It is not our belief that gun stores are essential businesses and they should not be open in the county of San Diego.”

Wells issued a statement defending El Cajon gun store AO Sword. He said, “In El Cajon, we would not cite or close or any store unless they were blatantly violating social distancing standards.” The store’s owner, David Chong, told KPBS television that he is experiencing 10 times higher than normal sales and that his store has implemented social distancing for their customers. “We made provision for them to stay six feet apart and we keep on that and explaining that for their safety,” Chong said. 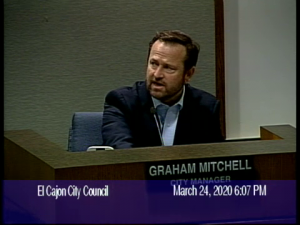 Since handwashing is a key concern in containing the virus, City Manager Graham Mitchell said that the city has requested three handwashing stations from the county to be placed at Wells Park, Prescott Promenade, and in front of the post office on Lexington Avenue.

“The county has actually run out of handwashing stations and are trying to secure another vendor or additional vendor for more. We have also asked for them at Bill Beck Park, El Cajon Valley Middle School Park, Judson Park, and in front of City Hall where people tend to congregate,” Mitchell said. “We continually stock the soap at all of our restrooms, recreation centers that are at the valley floor that are currently open.”

Mayor Wells discussed food distribution, indicating that while food for school aged children has been “pretty much covered,” he expressed concern for other city residents on tight budgets, including senior citizens. “I’m concerned about folks who don’t usually access food banks and other services. They have zero money. I’ve really challenged our city manager to figure out a way to provide for those people who are in the middle that really need some help,” Wells said. “We’re a couple of days away to putting out a program with services like that.”

Mitchell said that a food security gap exists in the community. “It is important that although it is sometimes cities don’t do, it is something that we need to step up and do.”

Food banks which are presently available include the Salvation Army, Feeding San Diego, CalFresh (managed by the County of San Diego), and local school districts.

As for questions regarding local residents being evicted from their homes due to the devastating financial impact of the government-ordered shut down, Wells said that the city will aim to advocate on their behalf. “We will do everything within our power to help. That’s my promise.”

Later this week, Governor Gavin Newsom issued an executive order prohibiting residential tenants from being evicted before May 31 due to inability to pay caused by the Covid-19 emergency. Renters must let landlords know they are facing hardships related to Covid-19 within seven days of when the rent is due in order to qualify for the eviction freeze, have proof of impacts the financial impacts and will still owe back rent after the freeze ends.

Since the webcast, Gov. Newsom also announced he has negotiated agreements with over 200 lenders who have agreed to work with homeowners to prevent foreclosure. Homeowners must contact their lenders to negotiate individual agreements.

The announcement came as the state announced that one million Californians have filed for unemployment benefits since Mar. 13, since businesses have shut down or dramatically scaled back because of the statewide mandated “stay-at-home” order to slow the spread of the virus.

Wells said that City of El Cajon parks will remain open while other cities around San Diego County have shut them down. He said that he could not promise that it would continue if people disregard social distancing, but said that  “closing them sends the wrong message.” Mitchell agreed that it is important for local city parks to remain open. “People need to get out of the house periodically. But we are a aware it is a place where contamination can occur.”

Local El Cajon parks are being disinfected once a day based on formula guidelines issued by the Centers for Disease Control, which involves a bleach and water solution and power washing. But Mitchell did caution residents to consistently do handwashing and maintain six feet physical distance from other individuals. 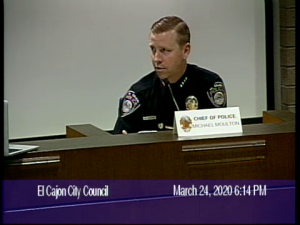 El Cajon Police Chief Michael Moulton (photo, left), reminded the community that despite  the emergency, “The men and women of the El Cajon Police Department are committed to protecting this community. If you call us, we’ll be there.”

Additional city resources during the emergency for residents are available at the City of El Cajon’s website.

which would benefit from more study and more explanation and not simply reiteration of "social distancing". . . . .CDC: The best way to prevent illness is to avoid being exposed to this virus. . . The virus is thought to spread mainly from person-to-person. .. Between people who are in close contact with one another (within about 6 feet). . . . Through respiratory droplets produced when an infected person coughs or sneezes. . .AND unlike other viruses IT IS TRANSMITTED BEFORE THE ONSET OF SYMPTOMS. . .and in a PRELIMINARY STUDY it was found that . . .the novel coronavirus SARS-CoV-2 CAN SURVIVE IN THE AIR FOR SEVERAL HOURS IN FINE PARTICLES KNOWN AS AEROSOLS. . .but we don't know the answers to questions like: Is coughing and sneezing essential? (probably not). . .Has person-to-person aerosol actually been tested? (no, it was only lab work). . .How far can aerosols travel? (Six feet is only a guess, chicken pox aerosols can travel tens of yards) etc. . . .here