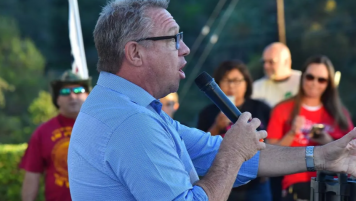 By Ken Stone and Chris Stone, Times of San Diego, a member of the San Diego Online News Association

November 11, 2021 (El Cajon) - Raging against “a plot to take over America and the rest of the world,” El Cajon Mayor Bill Wells spoke Wednesday at a rally of parents calling for freedom from vaccination mandates.

As many as 200 people gathered in front of Grossmont High School on the El Cajon-La Mesa border in advance of a school board meeting, where some signed up to be speakers.

Like many state school districts, the 17,000-student Grossmont Union High School District expects all in-person students vaccinated for COVID-19 by July 1, 2022.
Amy Reichert of ReOpen San Diego alluded to adjacent San Diego Unified, which requires students 16 and over to be fully vaccinated by Dec. 20. (Students 5-15 do not yet have a deadline.)
“This is why we are all here today — to hold the line,” she said into a wireless microphone as the crowd roared.
Organized by the group East County Mamas and Dads For Freedom, the rally saw fiery speeches by Mayor Wells and El Cajon Councilman Phil Ortiz.
Ortiz’s 4-year-old son was at his side. He asked the boy, “What is the role of government?” Son Wesley said, “To protect our liberties.” They stood amid signs that read “If standing up for your kids burns a bridge, I have matches. We ride at dawn,” “Forced injections — what could go wrong?” And “Fauci Kills Dogs. Your kids are next.”
One sign said simply: “Parents call the shots.”
Said Ortiz: “I’m pretty sick and tired of the government telling us what to do…. I don’t co-parent with the government.”
Fellow Republican Wells, an office-holder since 2008 who once led the Grossmont district’s Proposition H Bond Oversight Committee, said people “are waking up to the evil that is taking place in this nation.”
He saw a plot to “replace the freedoms that we have enjoyed, the freedoms that we fought for … and replace those with democratic socialism, socialism, communism — it’s all the same thing.”
He continued: “It is totalitarianism and it is designed to take all of the power away from the people, give it to a small minority of people at the top and make you subjects. This is all designed to make you serfs and for you to stay in your place, do what you are told, ask no questions, live with less and be happy about it.”
Decrying a shredding of the Constitution and people’s rights, he said lawlessness is pervading the country.
He urged attendees to attend many governmental meetings and to make their voices heard. Wells is a registered nurse with a doctorate in clinical psychology who notes experience working mostly with the severely mentally ill.
“You have to be willing to make sacrifices to not comply to protect the way of life that you have enjoyed all of your life, if not for yourself, your children and grandchildren.” 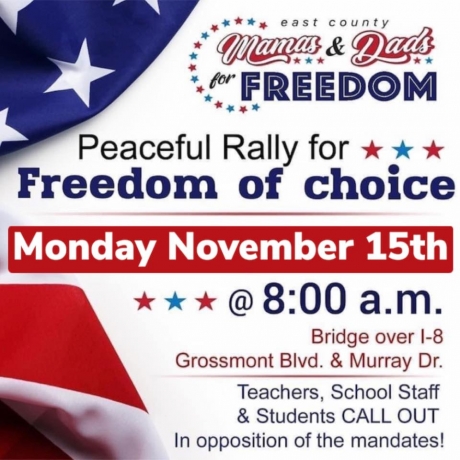 Photo, right:  another rally was scheduled for Monday, Nov. 15.
Councilman Ortiz, a pastor at Foothills Christian Church in El Cajon, offered the rally what he called a tagline: “The right to not get sick doesn’t exist…. You cannot restrict the movement of free and healthy people.”
He added: “People are going to do things that you don’t like and we’re going to do things that they don’t like, but we all have autonomy over our lives and our children.”
The message of most speakers was allowing parents to make the health decision for their children. A sign, “I want to be a grandma” expressed fear the vaccine would make a child sterile.
With a private Facebook group boasting 1,600 members, East County Mamas and Dads For Freedom says on its public page: “This is not a pro-V or an anti-V group. If you are V’d or not V’d, you are welcome here if you stand for freedom, freedom of choice, medical freedom, against mandates and are here to fight for all that is good.”
Grossmont High School baseball player Jacob Suter told Times of San Diego that fellow students weren’t worried too much about vaccine mandates yet because they haven’t been implemented.
All students are required to wear masks in classrooms, he noted but said of the vaccine mandate: “I don’t like it. I think it is lame. I don’t think we should be vaccinated without our choice.”
Suter said he was vaccinated, but classmate Santino Farace said the vaccine was not needed — and he didn’t plan to get it.
“It’s unfair for some kids because there’s going to be a helluva loss of kids,” Farace said. “People who don’t want to get vaccinated will stay home or they’re going to move.”
Nurse Miranda Grieshaber of the Douglas & Nancy Barnhart Cancer Center in Chula Vista said after her rally remarks that she wasn’t anti-vaccine or against the COVID jab.
“I’m grateful that it exists for the people who need it… I’m just against forcing it on kids that don’t need it,” said Grieshaber, listed on the part-time nursing faculty at Grossmont College. “I’m against using them as guinea pigs. I’m against using them as shields for other people because we don’t know the long-term effects of it. I’m grateful [for the vaccine] for the kids who are at risk. It does not need to be forced on all the other kids.”
Grieshaber, with two elementary-school-age children, noted accurately that COVID-19 has killed 38 kids in California.
“It is a 0.005% death rate,” she said. “Why are we putting millions of children at risk for 0.005%? As a nurse, I would have a completely different opinion if there was a higher risk. There’s not.”
Grieshaber added: “The vaccine has been around for less than a year. We don’t have the safety data to support it,” despite pharmaceutical studies and CDC assurances.
Last month, when Gov. Gavin Newsom announced public school protocols on vaccination, he said: “The state already requires that students are vaccinated against viruses that cause measles, mumps and rubella — there’s no reason why we wouldn’t do the same for COVID-19.”
He continued: “Vaccines work. It’s why California leads the country in preventing school closures and has the lowest case rates. We encourage other states to follow our lead to keep our kids safe and prevent the spread of COVID-19.”
Mayor Wells’ answer to such mandates?
Thirty percent of public safety officers in the city of San Diego will lose their jobs in about 20 days, he alleged.
“That is going to be a disaster for the people of San Diego,” he said. “It’s going to mean that people will literally die as a result of a political class who will make you comply, will make you knuckle under no matter what the cost to you because they don’t care what happens to you. All they care about is their agenda.”
Wells, whose Oct. 22 remarks in a Facebook video were flagged as COVID misinformation, said: “Everything that has been done has been in the name of fear — fear of death, fear of disease and now fear of ostracization and now fear of losing your jobs and livelihood.
“We answer to a power that is greater than government. We answer to God above.”

Wells and Ortiz are both disgraces to their offices. Turning a public health crisis into a political football is unconscionable. Shame on them.
I didn't hear an outcry when the chickenpox vaccine was added to the list of required vaccinations for school twenty years ago. I'm all for personal liberty, as long as your liberty doesn't infringe on mine. If you don't want a vaccinations or your children to be vaccinated, that's fine. Please stay home and away from school. Personal liberty has responsibilities as well as rights.
and will us this.
another right wing poop eater who has NO education in science!!!!HEY EL CAJON KEEP ELECTING THIS POOP EATER.