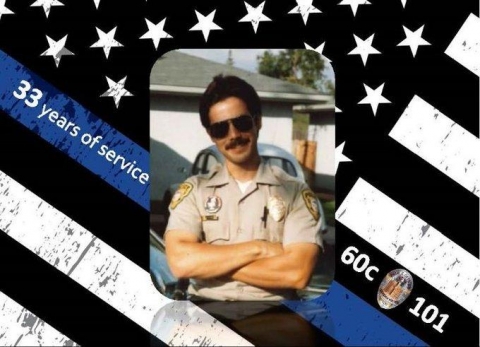 By Miriam Raftery
Photos of Chief Davis’ walk-out ceremony by Catherine Martin.
September 15, 2019 (El Cajon) – After 33 years of service with the El Cajon Police Department, Chief Davis retired on Friday. He received salutes and hugs as he walked out of the station in civilian clothes, turning over the helm to his replacement, Mike Moulton.
The ECPD posted on Facebook, “Yesterday was bittersweet, but we are very excited for him!” adding that Chief Davis will always be family, and will be missed. 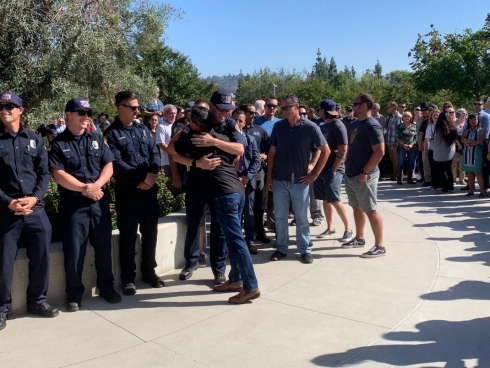 A Japanese-American whose grandparents survived internment camps during World War II, Davis says he never experienced prejudice growing up. A graduate of El Capitan High School in Lakeside, he attended Grossmont College and earned a bachelor’s degree in business management from San Diego Christian College before becoming an ECPD officer in 1986. He soon earned promotions to sergeant, lieutenant and captain.  He served as a school safety officer, trained recruits at the San Diego Regional Police Academy and as a team leader of the city’s SWAT team, responded to the school shootings at both Santana and Granite Hills high schools.
He coordinated implementation of a Department of Justice grant to address drug dealing on El Cajon Blvd. and managed the Crime Analysis Division.
Upon his appointment as Police Chief in December 2015, Davis drew praise form then-city manager Doug Williford who said, “From his time on the City’s SWAT Team to his leadership role in El Cajon’s diverse cultural community, Jeff has exhibited all of the characteristics that will make him successful as the City’s next Police Chief. Importantly, Jeff has developed the support of his officers, City staff, the City Council and the community at large.” 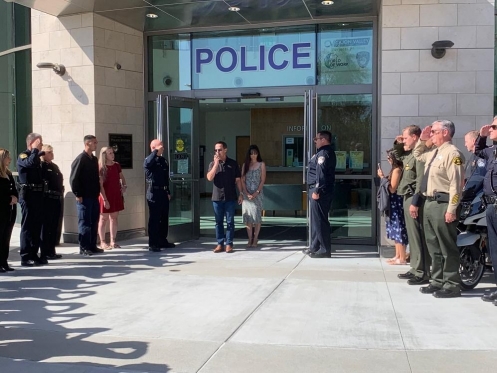 His tenure included some turbulent times. His calm leadership has been credited with helping to quell civil unrest after the fatal shooting of Alfred Olango, a Ugandan refugee, by an El Cajon police officer. The District Attorney ultimately ruled the shooting justifiable, since the mentally distraught victim pointed a vaping device resembling a gun at the officer.  The department also drew controversy over arresting activists for feeding homeless people in a park on Martin Luther King day in 2017, after the city banned feeding homeless people in public places because of a countywide Hepatitis A epidemic that began in an El Cajon homeless community.
Davis received a commendation from the city during the Sept. 10 Council meeting. He says he’s had a blessed career to have had the opportunity to lead the department that hired me,” the San Diego Union-Tribune reports. “I hope above anything else that I have left this department better than I found it, even if it is just a little better.”
Captain Mike Moulton has been appointed the city’s new Police Chief. During his tenure at the department,  he has served as a watch commander, SWAT team member, and detective, also overseeing training and international affairs.
Moulton has received five meritorious citations as well as the department’s medal of valor.
City Manager Graham Mitchell says of Chief Moulton, “I value his community perspective on policing and I know he brings strong leadership and management skills to the department. He will work in a collaborative manner to address city issues.”