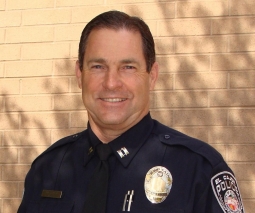 August 16, 2015 (El Cajon)—El Cajon Police Chief Jim Redman  has announced plans to retire on December 4th, the San Diego Union-Tribune reports. Redman has served as chief since 2011 and has been a member of the city’s police force since 2008.

Chief Redman, an El Cajon resident, told KUSI he is proud of his record. “I really believe I’m leaving El Cajon better than when I came into it.” He credits programs such as Crime-Free Community Housing, Neighborhood Watch and other community policing programs that engage the community to help fight crime and help drop even violent crime rates.

He called situations such as Ferguson, Missouri’s unrest a “wake up call” that shows the importance of engaging the community and building public trust.

The El Cajon Police Department has not been without controversy, notably a sexual harassment claim that remains pending. The department drew criticism from some community activists for demoting but not firing a sergeant accused of texting nude photos of himself to women who worked for him, however City Manager Doug Williford has stated that responsibility for hiring and firing rests with him, not the police chief.

Chief Redman has indicated that he looks forward to traveling and enjoying his hobbies, which include woodworking and restoring classic cars.

His replacement has not yet been named.

Let's look at a photo of the current Chief Redman here. He's moved up from two bars (when he was hired) to four stars, quite a leap, but he still looks too young to retire. Good for him.