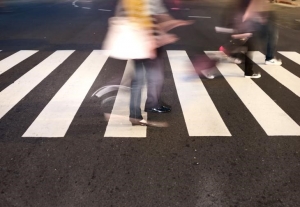 October 31,2016 (El Cajon)--The El Cajon Police Department has been awarded a $170,000.00 grant from the California Office of Traffic Safety (OTS) for a year-long program of special enforcements and public awareness efforts to prevent traffic related deaths and injuries.  The El Cajon Police Department will use the funding as part of the city’s ongoing commitment to keep roadways safe and improve the quality of life through both enforcement and education, according to a release issued today.

“The El Cajon Police Department is looking forward to working with OTS, our partners in Law Enforcement, and our community stakeholders to reduce injury and death related to traffic collisions,” stated El Cajon Police Lieutenant Randy Soulard. “With an emphasis on the prevention of pedestrian and bicycle-related collisions, we will work collaboratively using a multi-pronged approach in addressing education and enforcement aspects of collision reduction.”

After falling to a ten year low in 2010, the number of persons killed has climbed nearly 17% across the state with 3,176 killed in 2015 according to the National Highway Traffic Safety Administration.  Particularly alarming is the six year rise in pedestrian and bicycle fatalities, along with the growing dangers of distracting technologies, and the emergence of drug-impaired driving as a major problem. This grant funding will provide opportunities to combat these and other devastating problems such as drunk driving, speeding and crashes at intersections.

“Years of research tell us that enforcement and education work best jointly to combat unsafe driving,” said OTS Director Rhonda Craft.  “This grant brings both tactics together, with the Office of Traffic Safety and the El Cajon Police Department working in concert to help keep the streets and highways safe across the City of El Cajon and the state.”

Activities that the grant will fund include: