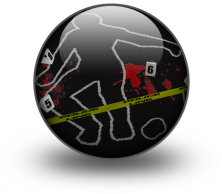 One bullet struck Goodlow in the face; another passed through a vehicle parked nearby on the Best Car 4 U car lot.

“Investigators are evaluating potential criminal charges,” Lt. Henton stated, but added that the Goodlow has not been arrested.

Pat Reardon witnessed the incident and told ECM news partner 10 News that Goodlow looked as though “he was trying to ditch something.”  He confirmed that  the victim refused to comply with officers’ orders.

A clerk at the St. Francis Motel nearby told the U-T San Diego that Goodlow was “Disrespectful, confrontational and prevocational.”

But another witness, Roy Mattingly, criticized police actions.  He told 10 News that he was across the street and shouted, “Don’t kill that man! You ain’t got no right shooting that man.”

Goodlow is in stable condition after surgery at Sharp Memorial Hospital.