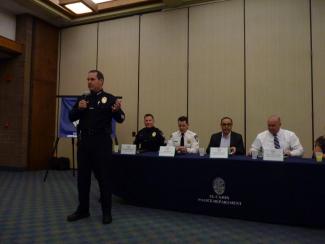 November 3, 2015 (El Cajon) – El Cajon has had 13 pedestrian fatalities in the past 20 months. In the prior 36 months, there were 10 fatalities. So in half the time, there have been double the number of pedestrian deaths.

“That concerns us a great deal,” Police Chief Jim Redman told community members at a public safety forum held last month at the Ronald Reagan Community Center, where the department reached out to share safety tips, hear community suggestions, and advise about a new enforcement campaign aimed at saving lives.  A “Check before you step” campaign aims to educate the public on how to prevent pedestrian injuries and deaths. 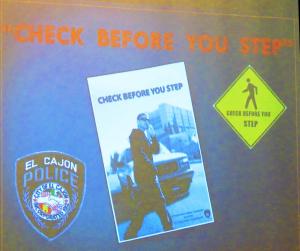 A video prepared by the department in English and Arabic  points out that drivers are too often distacted or under the influence or drugs or alcohol.

But in many cases, pedestrians are at fault.  Pedestrians may be uninformed of traffic laws, crossing mid-block (jay-walking) to save time, distracted by cell phones or music, drunk, or dressed in dark clothing that make them invisible to drivers after dark.

The problem goes beyond El Cajon.  Over 1,000 people in San Diego were injured in pedestrian-vehicle accidents in 2012, the last year for which statistics are available countywide, and that included 70 deaths from jaywalking.

About 80%  of El Cajon’s pedestrian collisions involve adults, with only about 20% involving juveniles.

Why does El Cajon have so many pedestrian accidents?

There are several factors.  The area is served by three trolleys and multiple bus stops, so there are many pedestrians in the area, many heading to or from local schools, parks, or the downtown business district.  The city also has many immigrants and newcomers who may not be familiar with local traffic laws and safety guidelines.

Police seek to dispel the “myth” that pedestrians have the right of way.  One officer noted, “The car wins, even if you’re right,” and urges pedestrians to follow the rules.

The problems are being addressed through education, engineering such as adding better lighting and sidewalks in some areas, and enforcement—including citations.

Jaywalking tickets can be expensive – around $192 for a first offense, and higher for multiple offenses.  The fines are set by the court, not by police.

For every 10% increase in enforcement, there is a 10% decrease in traffic collisions, according to the department.  In 2012, the department made 1800 contacts and issued 1100 citations, of which 640 were pedestrians.  Some got two tickets in the same day-apparently not getting the message.  In addition, 69 people were arrested and 43 vehicles impounded.

Engineering improvements include a $500,000 grant from CalTrans amd Rady Children’s Hospital to create safe routes to six schools in El Cajon.  Pedestrian safety improvements have also targeted Greenfield Drive near a middle school with no sidewalks; improvements slated include sidewalks, curbs, ramps and speed feedback signs.  Projects have been completed with federal grantsw near Madison and Johnson Avenues and Rentee.

Pedestrians walking at night should wear light-colored clothing with neon reflective bands or better yet, flashing lights on back; also use a flashlight. Only cross in crosswalks and wait for the walk symbol.  Never jaywalk between intersections. Look both ways before crossing the street.

Bicyclists should follow traffic rules and don’t drive the wrong way against traffic or on sidewalks.

Drivers should use extra caution, slow down, and watch for pedestrians—even if you can’t see them.

an analysis of how these 13 deaths occurred, including facts about the pedestrian and vehicle in each case. The generalities are all good, and instructive, but how many of these were at night, or jaywalking (serious mistake), etc....from the web...“Jay” used to be a generic term for someone who was an idiot, dull, rube, unsophisticated, poor, or simpleton. More precisely, it was once a common term for “country bumpkins” or “hicks”, usually seen incorrectly as inherently stupid by “city” folk. Thus, to “Jay walk” was to be stupid by crossing the street in an unsafe place or way, or some country person visiting the city who wasn’t used to the rules of the road for pedestrians in an urban environment, so would attempt to cross or walk in the streets anywhere. As it stated in the January 25, 1937 New York Times, “In many streets like Oxford Street, for instance, the jaywalker wanders complacently in the very middle of the roadway as if it was a country lane.”