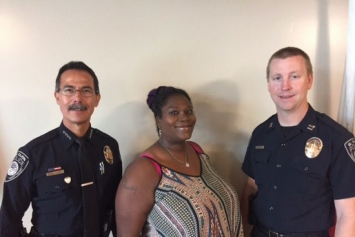 July 20, 2017 (El Cajon) – The El Cajon Police Officers Association has set up a Go fund me page (https://www.gofundme.com/ieshafund ) for Iesha Booker, a homeless mother of seven who came to the aid of Officer Sioson after he was knocked unconscious by a suspect who continued to assault him, causing serious injuries.

The 34-year-old MTS bus driver, was at the KFC in El Cajon when the assault occurred.  “When everyone else at the KFC stood around shocked, Lesha quickly stepped in, using Officer Sioson’s police radio to transmit `Officer Down at the KFC!’   It was that transmission which allowed us to expedite help to Officer Sioson, quickly arrest the suspect,” says Travis Howard, president of the El Cajon Police Officers Association.

He adds, “While getting to know Lesha and thanking her for her bravery and willingness to help Officer Sioson, Iesha said she was just trying to help Officer Sioson get home to his family, and doesn’t think of herself as a hero. We learned that she herself is experiencing difficulty, as she is a single mother of seven children; who range from 13 years to 10 months old.  She was recently renting a home that was sold off by the owner, causing her to have to move out without any place to go.  She is now living in her vehicle with her seven kids, while trying to get emergency housing.  She is also behind on her car payments and is worried they will soon repossess her vehicle; truly leaving her homeless. “

Howard said that after speaking with social workers, “We are finding that emergency housing is difficult to obtain due to her having many children and needing a large residence.”

“We are hoping to get public support behind Lesha and help her out of her financial hardship,” he said, adding, “We again want to thanke Lesha for quickly stepping in and assisting our officer.”

If you would like to donate to help Iesha Booker and her children, you can do so at https://www.gofundme.com/ieshafund ).