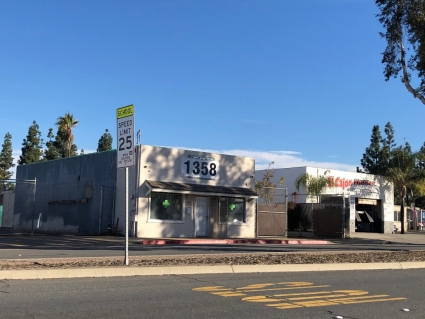 Police received complaints about the Broadway dispensary from the public beginning Dec. 9 and obtained a warrant yesterday, following an investigation. Today around noon, detectives and officers executed a search and detained 11 people.  Four employees were arrested.  Seven others were found to be customers and released.

Two of the arrestees were released from the scene with promise to appear (in court) notices and the other two arrestees were booked into the San Diego County Central Jail on felony charges.

The city has shut down over 60 illegal dispensaries since Californians voted to legalize first medical,  then recreational cannabis use, according to Councilman Gary Kendrick. “We get lots of complaints about them, especially from surrounding businesses,” he adds. City Manager Graham Mitchell confirms that El Cajon has closed down between 60 and 70 illegal marijuana businesses. The city council has also voted to impose hefty fines on property owners where illegal marijuana businesses are found operating.

The state has left regulation of sales up to each city, and El Cajon has opted to ban all marijuana businesses. That hasn’t stopped illegal operators from continuing to try opening new operations.

The public is encouraged to contact El Cajon Police at 619-579-3311 if you see a marijuana dispensary. According to a press release from ECPD, “The El Cajon Police Department will continue to swiftly and vigorously shut them down and arrest those individuals found operating them.”

Illegal pot shops pose dangers to both customers and the public. Unlike legal dispensaries, such as those operating lawfully in nearby La Mesa and San Diego, illegal dispensaries are not inspected by state or local officials. Products may be contaminated with pesticides, herbicides, or laced with other drugs.  Some illegal dispensaries have caused fires by storing flammable liquids improperly or with dangerous, illegal wiring. Illicit pot shops have also been found selling drugs other than marijuana, such as cocaine, methamphetamines and narcotics, and some have also sold drugs to minors, according to police and Sheriff officials in our region.