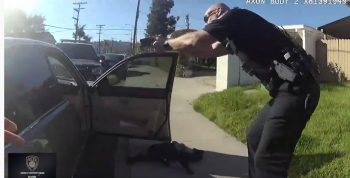 March 23, 2020 (El Cajon)—El Cajon Police have released body camera footage from multiple officers of the non-  lethal shooting of a car theft suspect, Keith Crenshaw, 21, on February 12th. The videos confirm that after waking up the suspect sleeping in the vehicle, officers repeatedly warned him to put his hands up, even after the suspect repeatedly said, “Shoot me!”

The incident began after Phoenix Police called to request that ECPD recover a stolen car identified via an auto-license reader.  Officer Stanley and his trainee, Officer Jabrael, arrived at 544 South Johnson and Officer Sandoval along with a civilian approached from the rear.

Officer Stanley and another officer can be hear continuing to try and convince the suspect to put up his hands.  Officer Stanley stated, “No, I do not want to kill you. Let me see your hands.”

The suspect responded,"Just do it."  The officer warned he would shoot him if he did not show his hands.

When the suspect reached into his shirt, Officer Stanley fired his service revolver.

Officer Stanley immediately requested medical aid and the officers worked to staunch the suspect’s bleeding with a medical kit.  One of the officers tries to comfort the suspect, saying “Hey, stay with us, young man.”

The video appears to show the suspect wounded in the lower right side of his torso.  He was taken to a local hospital and survived.

A search of the vehicle found no weapon.

El Cajon Police Chief says the video was released in the interest of providing as much information to the public as possible.

“We strive to deescalate a situation whenever possible,” the Police Chief states.