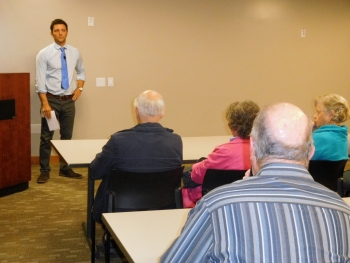 At a packed assembly with an estimated 80 residents at the El Cajon Police Station, a majority had questions for Kalasho about what the city is doing to address the growing plight of their unsheltered neighbors, and what more can be done.

The operations at Gillespie Field were also a hot topic among a sizable group of residents, both those against increased flights, and those supporting the airfield.

“It’s become an epidemic,” said one resident who didn’t give his name, regarding the surge in homeless residents near his home. He added that when he drives through daily and sees refuse and shopping carts, “…you just want to throw up.” 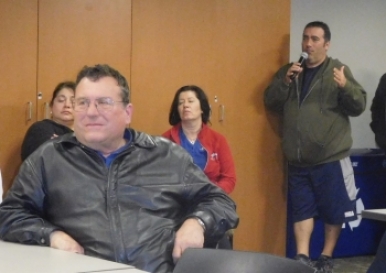 Other residents said the homeless population has been steadily increasing in recent year. One person charged that the city has become an attractive destination for homeless people roving across the country.

“There are transients on my block every night,” said a woman. “You never see a homeless person in Carlsbad….but El Cajon is known on TV as the anus of America. It’s just gotten really, really bad, and out of hand.”

Kalasho sympathized with the numerous complaints from residents, but said he frankly had no ready solutions. Many homeless are suffering from mental and physical problems, while others are daily drug users and alcoholics, and are unable to work and change their lifestyles.

Yet a small number of the group that he estimated to be between 20 to 30 percent are ready, willing and able to work, and can be helped off the street, Kalasho added.

Kalasho said he proposed a program that would get people into transitional housing and a job, but also included banning aggressive pan handling, and taking away shopping carts from the homeless.

Kalasho said his proposal was rejected by his colleagues on the City Council. “It was nixed but in no way am I giving up on it,” he said.

Another part of his solution involves getting liquor stores to voluntarily stop selling booze to drunken people. Kalasho noted that as a Chaldean, a Christian Iraqi, he had some sway in obtaining buy-in from the shop keepers, many of whom are Chaldeans.

“It’s going to take someone like me, one of their own, to tell them ‘You’re being defined by this,’” Kalasho said. “You can redefine yourself.”

One woman who was affiliated with a local church said she wanted to partner with the city to do outreach to the homeless, but Kalasho said his experience in working with churches on the homeless hasn’t been all that productive.

Many times church homeless programs have the best of intentions but when they are feeding people who have been on the streets for a decade, it’s clearly not working, Kalasho said.

“I don’t believe in enabling; I believe in empowering,” he said. “I’m more than willing to partner (with churches) but we have to have a meeting of minds.”

A sizable number of residents were also interested in Gillespie Field, with some complaining about the noise from increased flights. Others, mostly pilots and former pilots, said the airport on the northern edge of the city is a positive for the city, providing lots of jobs and tax revenue.

Leslie Day said as the owner of a hanger at the airport, she pays more than $5,000 annually in property taxes to the county, but some of that money goes to El Cajon and local school districts. She also uses a slew of other services from local vendors, “and I’m one of over 800 pilots….We pay a lot of money into the system.”

Tom Hannawa, president of American Aviation Academy, one of five flight schools at Gillespie, said his school generates “quite a bit of revenue from foreign nationals,” and asked Kalasho for help in supporting his business.

Several residents said the increase in student flights at the airport comes with more noise. To a question about a purported agreement between a major flight school and the county to add even more student training, several pilots said such an agreement was only a rumor. Hannawa said if true, the alleged agreement would “put us on the map.”

When one resident complained about pilots not adhering to flight paths, a few pilots said the paths are only recommendations from the FAA, are not required, and that the paramount consideration when landing is safety.

Kalasho, the owner of a car wash and a day trader, readily admitted he didn’t have answers to all the residents questions but assured them he’d get back to anyone who provided their contact information. He said the town hall was being held to get to know residents better, and to determine how he could do his job better.

“I want to be accessible to each of you, and want to go to work for you,” he said. He added he’d probably do another town hall next month.

Mr. Kalasho, it has always been illegal in the state of California to sell alcohol to people who are intoxicated. El Cajon's Deemed Approved Ordinance put local teeth into preventing this practice. If Mr. Kalasho or other residents know of stores that do sell alcohol to someone intoxicated they should report that to the El Cajon Police Department.