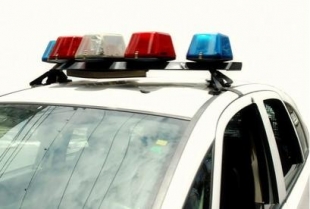 During the incident, witnesses described an argument occurring between two males and the suspect, near a kiosk in the 1000 Block of Decker Street. The suspect walked away from the argument to a vehicle parked a short distance away and retrieved a handgun. He then walked back to where the kiosk was at and fired numerous shots at the victims striking one of them in the leg. The suspect fled the scene in the vehicle.

Detectives with the El Cajon Police Department as well as detectives from The East County Regional Gang Task Force were able to identify the suspect as 41-year-old Michael Riordan of East County.

On November 1, Detectives located Riordan in a vehicle in the Lakeside area and followed him onto Westbound Interstate 8. With the assistance of a Sheriff Department Helicopter and two San Diego Harbor Police Officers in a marked patrol unit, a traffic stop was attempted, says Lt. Walt Miller with El Cajon Police.

Riordan failed to yield for the officers and a short pursuit of approximately three miles and lasting less than three minutes led officers into Lemon Grove. Riordan drove to residence of a person known to him and nearly struck a small child standing in the driveway. Riordan exited his vehicle and briefly fought with officers until an officer tased him. He was then taken into custody without further incident.

Detectives served three search warrants at homes in the East County area where Riordan was known to stay. A handgun matching in caliber to shell casings left at the original scene was located during the service of one of these search warrants.

Riordan has been booked into San Diego County Jail on charges of Assault with a Firearm, Felon in Possession of a Firearm, Felony Evasion, Threats to a Police Officer, and Child Endangerment.

Anyone with additional information is asked to call the El Cajon Police Department or San Diego County Crime Stoppers.