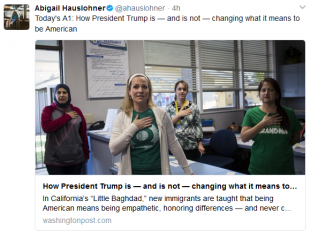 April 15, 2017 (El Cajon) – Efforts of El Cajon teachers to help Middle Eastern immigrant children have been highlighted in a Washington Post article titled, “How President Trump is – and is not—changing what it means to be American.”  Read the full story.

The article, by Abigail Hauslohner, a former war correspondent and national reporter who covers Islam, Arab affairs and America, looks at Anza Elementary School, where 70 percent of students speak a language other than English at home.  Rhonda Fattohi officially teaches English, but Hausloher notes, “Unofficially, she offers these children something much more profound: a vision of what it means to be an American.”

The story also includes interviews with families, some of whom are disturbed by President Donald Trump’s anti-immigrant rhetoric and actions that have left some refugees and immigrants wondering whether it’s still possible to have a promising future in America.

El Cajon is home to one of the nation’s largest populations of Iraqi Chaldean Christians as well as a growing number of Muslim immigrants from the Middle East. Cajon Valley School District has taken in 836-foreign born students this year alone, and a third are Syrian refugees.  The city also has a high number of Latino immigrants, many also living in fear in the wake of Trump’s ramped up deportation policies.

In her article, Hausloher also speaks with families who have come to El Cajon on the ordeals they have endured, their hopes and fears for their futures. Her story includes tales of newcomers from Iraq, Syria, Mexico and more.

The challenges range from culture shock over revealing dress to the difficulties faced by large families, such as not being able to fit all of their children into a car legally.

But at the school, the children blossom as they study science and gardening, read books and learn tolerance. Empathy, taught here, encourages all students to put themselves in others’ shoes, feel fellow students’ pain and offer comfort.

Fattohi, a daughter of Chaldean immigrants, teaches her students that despite differences in cultural traditions from dress to diet, they can love America—and belong here, in a nation that has long recognized strength in diversity.