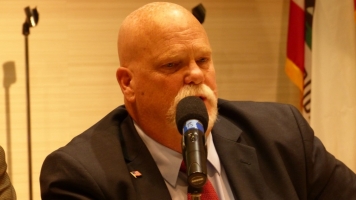 January 26, 2017 (El Cajon) – In the same week that President Donald Trump announced an executive order to block new immigrants from Iraq, El Cajon Veterans Commissioner George Glover stated, “Why doesn’t Ben Kalasho go back home to where he came from?”

Kalasho, told of Glover’s quote, texted Goetz, “I’m shocked right now. I’ve been nothing but nice to him, thanking him always and supporting his business.”

East County Magazine gave Glover a chance to respond prior to publishing his statement. He provided a written response voicing “respect” for Kalasho and insisting his words were not meant as racist, then demanded an apology. He did not refute making the statement, but insisted it was taken out of context. He did not respond when asked for that context or why he made the remark.

“Apparently, you took something out of context and spun it to mean what you wanted to hear.  If you want to try and make trouble be sure that you understand the context someone is talking in.  Your implication has racist over tones and I do not appreciate it one bit.  Be very careful Mr. Goetz when you try to imply something when only hearing a sliver of the entire conversation.”

He added, “I consider Ben a friend, and over the course of the election last year Ben and I talked quite a bit.  Our political views may differ, but Ben and I have no problems talking with each other.  I respect Ben for standing up for what he believes in even if I don't always agree with him, as he doesn't always agree with me.  Ask Ben and he'll tell you the same about me.”

Glover further stated, “The last thing I would tell anyone from Iraq, especially a Chaldean, would be to go to a country where they were persecuted for their religious beliefs. You're implication is outrageous, and I believe an apology is in order.  You can do that via this email, or you can call me at --- and apologize over the phone.”

“I was not present but would like to hear what you DID mean by your remark.  If that wasn’t meant as racist or derogatory, why DID you say it?  Simply saying it’s out of context doesn’t clarify the point to me.  Since you know that Mr. Kalasho was born in Iraq, saying he should go back home to where he came from seems troubling from a civic representative,” she wrote, noting Trump’s push to block Iraqi immigrants from coming to the US and ramp up deportations of many immigrants.

She added, “I fail to see how Jonathan owes anyone an apology for asking you to clarify your intent in making a comment that sounds if not racist, certainly insensitive toward immigrants.  Your effort to intimidate our reporter instead of clarifying why you made such a statement, is also troubling. If anything, perhaps you should apologize for making a remark that to most people’s ears would sound demeaning toward immigrants.”  She added that reporting on remarks about immigrants in today’s climate is “important.”

Glover has not responded to our editor’s message.

think Glover was joking about his carpet-bagging in from Santee, but it was probably a double-entendre, Freudian slip or cover-up... most likely a confluence of all three. We're all human but it was spoken in Council chambers so fair game, well within earshot, written down immediately and in the presence of the man he was trying to amuse. I stand by this story yet admit in hindsight Glover was right about Kalasho, who ended up dispensing his father's people as he had already done his father-in-law's values.

Makes one wonder whose Council Members Coatails this guy was riding on to get a Commission position.

The appropriate time for official action in my opinion is upon conclusion of his term (Matthew 13:49)
asked a Veterans Commissioner, one of several who serve an advisory capacity to the City Council and the City Manager, and who have no responsibility for anything, why Councilman Ben Kalasho voted against Mary Thigpen for Personnel Commissioner and he responded “Why doesn’t Ben Kalasho go back home to where he came from?”. . . . Still with me? . . .Certainly there are more important events in El Cajon than the fact that a Coast Guard veteran in an advisory capacity is a retarded racist? The country is full of them.

Iraq is a country not a race. You sir are a pathetic name caller, who needs to look in the mirror.