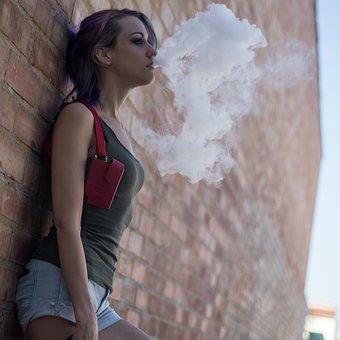 By Miriam Raftery
Photo: Young woman vaping, image via Pixabay
September 11, 2019 (El Cajon) – El Cajon’s city council will be considering a ban or other restrictions on sales of vaping products, such as banning flavored vapes, at its October 8th meeting at 3 p.m.
Councilman Gary Kendrick, who asked that the issue be added to the agenda, told  ECM, “I may take some heat for this, but it’s the right thing to do.”
The action comes a public health crisis in which five deaths and 450 cases of severe lung damage nationwide have been linked to vaping, some governmental entities are cracking down on sales of vaping products, also called e-cigarettes, e-Hookahs and Juuling.
The Trump administration today announced plans to ban sales of all flavored vaping products, NBC news reports. Although the illness and deaths are suspected to be caused by chemicals in tobacco-based vapes as well as in illicit marijuana vaping products, federal health officials are also concerned with stopping the alarming growth in young people smoking e-cigarettes.
“The Trump Administration is making it clear that we intend to clear the market of flavored e-cigarettes to reverse the deeply concerning epidemic of youth e-cigarette use that is impacting children, families, schools and communities,” Health and Human Services Secretary Alex Azar said in a statement. “We will not stand idly by as these products become an on-ramp to combustible cigarettes or nicotine addiction for a generation of youth.”
President Trump stated,  "A lot of people think vaping is wonderful, is great...It's really not. We have to find out the extent of the problems...it’s so new ...but we’re going to find out."
The action has been praised by health officials but criticized, predictably, by the American Vaping Association which has stated, “"A ban will remove life-changing options from the market that have been used by several million American adults to quit smoking,” said.
But amid the vaping health crisis, last week the Centers for Disease Control and the U.S. Food and Drug Administration called for all Americans to quit vaping and for smokers wishing to quit smoking cigarettes to consult their physicians and choose FDA approved methods instead of vaping, undercutting the AVA’s argument for keeping its products legal.
Other governmental entities are also cracking down. In June, San Francisco banned sales of all e-cigarettes.  Last week, Michigan became the first state to outlaw sales of flavored e-cigarettes, including retail and online purchases.

My wife attended an 8 week heath clinic on lung issues at UCSD months ago and they predicted this issue with vaping...basically the oil gets in your lungs and does much damage.