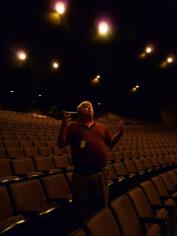 February 24, 2014 (El Cajon ) – El Cajon City Council and its redevelopment agency are negotiating “price and terms for the potential lease” of the East County Performing Arts Center (ECPAC).  A lease could allow the church to rentl use of the facility for a specified period of time each month or year as an anchor tenant, but is not a management contract, which is set to be negotiated separately.

“Apparently, El Cajon City is negotiating with The Rock Church behind closed doors to lease ECPAC,” said Ray Lutz, chair of the Save ECPAC committee and founder of Citizens Oversight, a watchdog citizens group.

The agenda for the February 25 joint meeting of the El Cajon City Council and its redevelopment entity includes an agenda item during closed session titled “Conference with real property negotiator.” It reveals that the City Manager, Assistant City Manager and City Attorney are engaged in negotiations with Rock Church and Mark W. Stevens to lease ECPAC, a theater owned by the public.

The theater has been closed for several years.  Last year, Council voted on funding to renovate and reopen the theater, promising to have it reopened by the end of 2014 and to hire a professional theater manager.

So let me get this straight.... It's a bad thing for an organization to (likely) guarantee ECPAC is used EVERY Saturday night and Sunday with the income going to the City? Seems like the City is likely saying, "But what do we do when we get another group that wants one more Saturday nights? You can't have exclusive use always." And thus the (real property) negotiations which, contrary to the inference of the quote attributed to Ray Lutz above, is allowed under the Brown Act. I see a win for all involved in this.