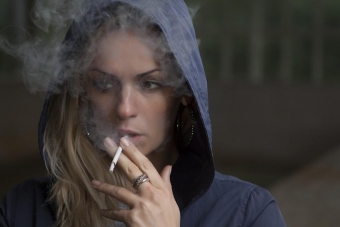 By Miriam Raftery
August 5, 2019 (El Cajon) – El Cajon’s City Council will consider tough new penalties for retailers caught selling tobacco to minors. A proposed new ordinance includes cracking down harder the very first time a retailer violates the law, since there have been 43 instances of first-time offenders selling tobacco to youths from 2017 to the present.
“These tobacco sellers are profiting off the future suffering of our children,” Councilman Gary Kendrick told ECM.  Kendrick, who has long spear-headed efforts to protect children from accessing tobacco, adds, “According to the Centers for Disease Control, half of all smokers will die [from smoking-related illnesses.”
Back in 2004, El Cajon adopted a strict Tobacco Retailer’s License that gave the city the power to slap heavy fines on stores selling cigarettes or other tobacco products to people under age 21, or for repeat offenders, suspend or permanently revoke their licenses. Five years ago, the city updated its ordinance to include e-cigarette vaping products as well as hookahs.
But things have changed since then. Newly appointed Councilman Phil Ortiz says penalties are no longer effective, adding, “We nee to take a hard look at this,” the San Diego Union-Tribune reports.
Councilman Bob McClellan concurs that the city needs to do more to curtail tobacco sales to underage customers. Councilman Steve Goble called for action to also curtail second time offenses.
Under the city’s current law, first-time violators can pay a fine in lieu of losing their license to sell tobacco products for 30 days – and many do just that. After a second offense, violators may be charged a fine and lose their license for 90 days. By the third offense, they can lose their license for a year and pay a fine.  If a fourth violation occurs, the license is permanently revoked.
The nonprofit Community Action Service Advocacy conducts compliance checks for the city. While first-time violations are on the rise, there have also been 17 second-time violators, but only one retailer with a third offense.
Kendrick has proposed making a fine mandatory on the first offense, possibly as high as $2,500. McCellan suggested even more, asking staff to research the maximum that could legally be assessed.
Kendrick anticipates the item will be heard at the October 24th Council meeting.

Forget fines, cancell their liquor license, I'm guessing most of these stores sell beer or booze .