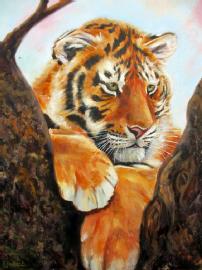 February 16, 2013 (San Diego’s East County)--El Cajon resident and wildlife painter Gloria Chadwick has been selected as the featured artist for the 40th annual California Open Wildlife Art Festival, Saturday and Sunday, Feb. 16 and 17, at Liberty Station in San Diego’s Point Loma area. The festival, open to the public, will run from 9:30 a.m. to 4 p.m. on both weekend days at Liberty Station’s Corky McMillin Event Center, NTC Promenade, 2875 Dewey Road, San Diego. Admission is $5 per person, and children under 12 years of age are free. For more information, visit www.PSWA.net.

The festival, expected to draw more than 100 artists, is presented by the Pacific Southwest Wildlife Arts, Inc., a non-profit organization that promotes wildlife art, including traditional hunting decoys, paintings and wildlife and bird photography. The annual exhibition and competition attracts top carvers, wildlife artists and art lovers from all over the United States, Canada, Russia and Japan. This year’s show will include carvings of wildfowl, fish and birds, along with appraisals of antique decoys and vendors of tools and supplies and an appearance by Sky Hunters, a Lakeside-based  non-profit group dedicated to informing the public about hawks, owls, falcons and eagles and promoting conservation of raptors and birds of prey. The show is funded in part by the City of San Diego Commission for Arts and Culture.

Chadwick is an internationally known artist an a member of the invitation-only Artists for Conservation (AFC), an exclusive international group of 500 of the world’s most gifted nature artists from 27 countries across five continents. She also is a member of Women Artists of the West, California Art Club and East County Art Association.

Chadwick also is a public official currently serving on the board of directors of the Grossmont Healthcare District (GHD), a public agency that supports various health-related community programs and services in the East County region. A second generation San Diegan and resident of East County since 1964, Chadwick in 1998 became the first woman to be elected to the GHD board in 22 years. In 2000, she was the first woman ever to serve as board president. She was reelected in 2002, 2006 and 2010. The registered nurse retired in 2008 as a psychiatric nurse after a 44-year career in the healthcare profession.