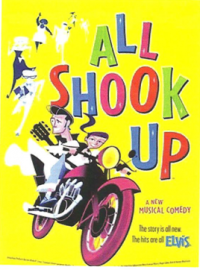 June 5, 2015 (Lakeside) - El Cap students rocked the energy and made us feel  a part of this small, square town, for a couple of hours. They brought the spirit of Rock and Roll, as inspired by Elvis Presley, in the early sixties. Good. clean, fun for everyone. If you are in the area and like theatre, come by and support these future entertainers.

For those who have not seen "All Shook Up" and this was my first time. Only wetting my appetite for when I go see the show in Vegas, and then again by San Diego Musical theatre in June. To see how they compare. This is the story of a Roustabout who comes to a  small town where basically any public display of affection has been banned by the mayor. A story where boy likes girl who likes a different boy, who likes another girl, who likes another guy, who likes another gall, and so on. Which like the loveable corny movies of it's inspiration, ends with everything working out for everyone. Happily-ever-after.

This East County high school actually can sing. With several amazing voices. Best voice for me would go to Zoee Bauer, a freshman in her first role as Loraine. Other notable singers were Corissa Knaresboro, as Slyvia, and Geizy Irizarry, as Natalie. Dakota Griggs play Chad. The Elvis type roustabout. Did he look like Elvis? No. Did he sing like Elvis? No. But he brought a certain appeal to Chad all his own, that would have teenage girls back then hearts aflutter. And a nice smile.

One of my favorite characters was Devin Wade as Dennis. However not only did,  Jordon Taylor, Megan Patton, Sarah Talya, Jacob Hobbs, Jacob Ingrassia, Briana Faison, rock the principals, the nine team ensemble made the show work.

The show featured 25 Elvis Presley songs including, Jailhouse Rock, All Shook Up, Don't Be Cruel, Fools Fall In love, and probably at least one of your favorites. My personal favorite in this show was. Hound Dog/Teddy Bear.

The story takes place, in a diner, museum, and the old Fairgrounds. For which the set and prop team deserves kudos for a great job. They had great props including, a jukebox, popcorn machine and not one but two carousel horses.